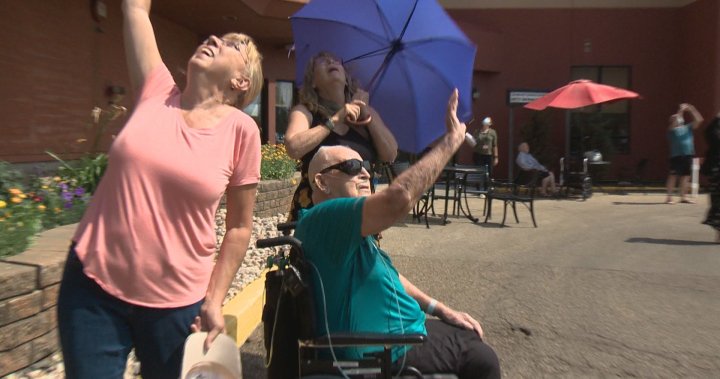 Chris Bellchamber turns 100 on Wednesday, and the milestone anniversary was marked by a special flyby Monday of the Canadian Forces Snowbirds.

â€œWonderful is probably the best word I can use,â€ the Edmonton man said of the honor.

Bellchamber has a long history. His daughter, Chris Monilawis, said he was a bomber pilot for Britain during WWII. He immigrated to Canada with his wife in 1950.

‘My eyes filled with tears’: 97-year-old Alberta veteran receives surprise of a lifetime on birthday

â€œThere he enlisted in the RCAF (Royal Canadian Air Force) in 1951, and he was part of the maritime patrol. He was also involved in the Cold War and traveled to Cuba during the Cuban Missile Crisis, following Russian ships, â€Monilawis said.

“He’s had a lot of excitement in his life.”

Bellchamber’s family wanted to bring back some of that excitement. After hearing that the Snowbirds would be in Camrose, Alta., One of her daughters asked if they would consider doing a flyby.

We will be doing a quick flyover of the community of Millwoods around 1:40 pm today in Edmonton to pay tribute and a happy 100th birthday to F / L Chris HC Bellchamber, RCAF pilot for 415 Swordfish Squadron in Summerside PEI and veteran of World War II. Happy Birthday Sir! ðŸ¥³

â€œMy sister emailed and I was like, ‘They’ll never do anything,’ and they said, ‘Yeah sure,'” said Monilawis.

â€œIt takes your breath away a bit. It’s a bit of a blessing.

Bellchamber said he flew 5,000 hours with the Air Force.

â€œHe flew on Halifax, Wellington, Lancaster during the war, and when he came here he flew on Lancaster and also on Argus. They are quite big planes. We’re pretty proud of him, â€said Monilawis.

The flyby only lasted a few moments, but it was much appreciated. Bellchamber has had a difficult year. Before Christmas, he went to the hospital with congestive heart failure. Then he caught COVID-19.

â€œIt was a tough start and we didn’t think we had him here with us yet,â€ said Monilawis.

â€œHe’s a bit of a fighter. He’s had malaria twice (in World War II)â€¦ and he’s had cancer three times, so the man can fight.

“It’s a shame that I can’t see much anymore and hear a lot, but I’m here,” said Bellchamber.

Despite these challenges, Bellchamber still got a glimpse of the special flyover for his milestone birthday.