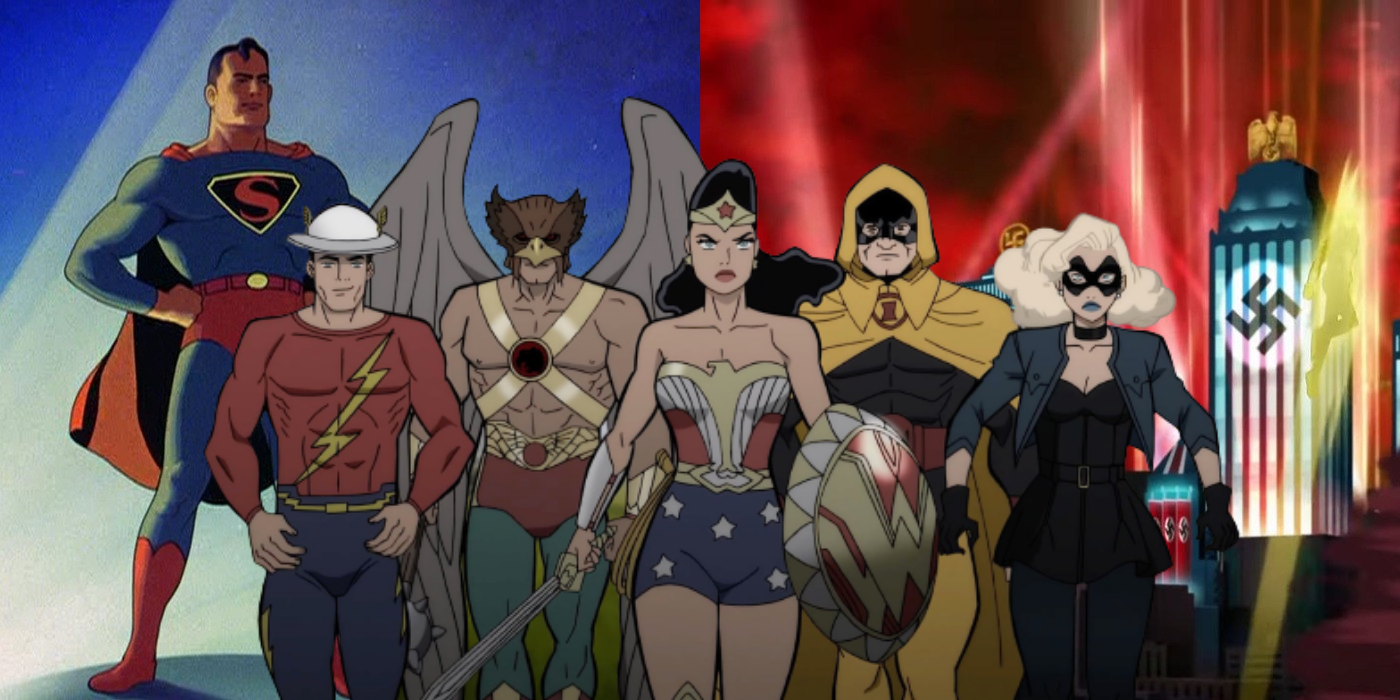 WWII and 5 Other Times DC Heroes Fought Nazis in Animation

The birth of the American superhero comics industry is closely tied to the events of World War II, often depicting Nazis as villains in many early stories. Iconic moments include Captain America punching Hitler in the face on the cover of his first appearance as well as the covers of both Superman #12 and #13 which depict the Man of Steel encouraging Americans to join the military while punching a Nazi warship.

Justice Society: WWII is one of DC’s last animated original films and sees the Golden Age superhero team battle against the Nazis and Axis powers during World War II. However, this isn’t the first time fans have seen DC heroes go up against Nazis. The classic match has been depicted in nearly every DC animated property, from 1940s Max Fleischer cartoons to The CW’s “Arrowverse” spin-off, Freedom Fighters: Ray.

The Justice Society of America was created by Sheldon Mayer and Gardner Fox and got its start in All-Star Comics #3. The JSA was the first superhero team in comics and consisted of Golden Age heroes like Doctor Fate, Hourman, The Spectre, Sandman, Atom, Flash (Jay Garrick), Green Lantern (Alan Scott) and Hawkman.

In 2021, Warner Bros. Animation and DC released their 41st DC Universe Animated Original Movie, Justice Society: WWII, directed by Jeff Wamester. The story follows a modern-day Flash (Barry Allen) who, while trying to stop a kryptonite bullet from hitting Superman, accidentally enters the Speed ​​Force. He arrives in the past, later revealed to be an alternate Earth, where he joins forces with the Justice Society of America to defeat the Nazis. The story takes place in the new DC Animated continuity that began in Superman: the man of tomorrow and could have repercussions in the future as this version of Barry Allen made an appearance in the end credits scene. Batman: The Long Halloween alongside Green Arrow.

One of the most memorable portrayals of Nazis in DC Animation was the three-part Justice League episode titled “The Savage Time”. The story features 6 league members, Superman, Wonder Woman, Green Lantern, Hawkgirl, Martian Manhunter and The Flash, as they find themselves in an alternate Earth where Vandal Savage had supplanted Adolf Hitler as leader of the Nazi Regime with help from his future self.

RELATED: 10 Things The DCAU Does Perfectly

These episodes feature appearances from other notable DC characters, including another Batman who formed an underground resistance. Additionally, Wonder Woman teams up with Steve Trevor to aid her in her efforts to provide intelligence on an impending attack on England to the Allied Forces; Hawkgirl and Superman team up with the Blackhawks, an independent multinational team of pilots fighting against the Nazis; finally, after running out of juice in his ring, John Stewart, uses his military background to team up with Sgt. Rock and the Easy Company in an effort to find and destroy Savage’s hidden trail. Although the team succeeds and eventually returns to the correct timeline, the repercussions of this adventure are referenced throughout the DCAU, including both parts JLU Season 1 finale, “The Once and Future Thing”.

“The Savage Time” wasn’t the only mention of Nazis in the DC Animated Universe (DCAU). In the Justice League Unlimited episode “Patriot Act”, it is revealed in a flashback that during World War II, the vigilante, Spy Smasher, defeated the evil Captain Nazi and stole an experimental super-soldier serum which is currently kept at Project Cadmus. The episode centers on General Wade Eiling, a recurring antagonist throughout the series and an outspoken critic of superheroes and how they fail to respond to the US government. After being outmaneuvered by Superman and the league multiple times, he is demoted and assigned to office duties, which angers the General and leads him to inject himself with the experimental Super-Soldier Serum.

Eiling becomes a monster with super strength and invulnerability and rushes to get revenge on Superman. When he arrives in the city, he encounters resistance from several unpowered heroes who make up the Golden Age team known as The Seven Soldiers of Victory, including Vigilante, Shining Knight, and Green Arrow. After nearly killing the heroes and endangering many other innocent lives, Eiling realizes he has become the thing he hated the most and flees, never to be seen again on the show.

C.W. Arrow was a huge success for the channel and for DC, spawning several series that take place in the same universe and multiverse, including the flash, super girl, and more. In 2015, the Arrowverse made its first attempt at an anime series with Vixen, a web series exclusive to CW Seed, CW’s online streaming platform. Vixen had two seasons and led to another animated web series called Freedom Fighters: Ray. This web series grew out of the events of the Arrowverse crossover event “Crisis On Earth X” which revealed that there was an alternate universe called Earth-X where the Axis powers were victorious during World War II.

RELATED: Arrowverse: 5 Reasons To Make More Animated Series (& 5 Not To)

Freedom Fighters: Ray follows Ray Terrill aka The Ray who is displaced from Earth-1, the main Arrowverse universe, as he leads a team called Freedom Fighters consisting of Citizen Cold, Guardian, General Winn Schott, and Red Tornado. The team fights against the New Reichsmen, a modern Nazi regime led by Overgirl (Supergirl of Earth-X) and Black Arrow (Green Arrow of Earth-X).

2 DC’s iconic World War II veteran, Sgt. Rock, defeat the Nazis with the help of a vampire and a werewolf

Showcase DC is a series of DC animated shorts that focus on a particular character and are often included as bonus content in major DC animated films. The home outing of Batman: Hush in 2019 included DC Showcase: Sgt. Oscillate, which featured the titular character who first appeared in military comics, Our army at war, in 1959. Staff Sgt. Rock is best known for leading his Easy Company unit during the events of World War II.

The animated short followed flashbacks from Sgt. Rock when he leads a team called Creature Commandos made up of three upgraded soldiers, each themed after a classic storybook creature including a wolfman, a vampire, and a Frankenstein-like monster. The team is tasked with capturing a German Nazi scientist currently hiding in a medieval castle. The mission was derailed when it was revealed that the scientist was working with Sgt. Rock’s nemesis Iron Major, who became Sgt. Rock’s squad, Easy Company, as undead soldiers. Realizing that the US military wants the scientist to create his own undead army, he takes it upon himself to kill the scientists and burn down the lab, assuring that such experiments would never be used on anyone again. that is.

Man of Steel’s first animated release was in the 1940s film series by Fleisher Studios and later Famous Studios. The series had a total of 17 10-minute animated films featuring Superman battling giant robots, gangsters, natural disasters, and, in one episode, Nazis.

The film, titled “Jungle Drums”, is the 15th produced and was released in March 1943. The film begins with a tribe of Aboriginal warriors deep in the African jungle whose leader is revealed to be a Nazi commander and whose temple is actually a Nazi. outpost. After shooting down an American military plane, the mortally wounded lieutenant hands over secret documents to Lois Lane, the sole survivor of the crash. She continues to be captured by the native tribe but is eventually rescued by Superman and uses the documents to help the Allied forces win the war.

NEXT: 10 DC & Marvel Heroes Who Served In The US Military

Coby Greif is a writer for CBR and a lifelong fan of comic book heroes, cartoons, movies, and more. Give him a follow on Instagram, Twitter, and Facebook. Although Coby is not an official member of the Justice League or Team Urameshi, he will gladly fight to save the world from the likes of Demons and Darkseid.

implications of the Russian-American Cold War | By Ayaz Ahmed