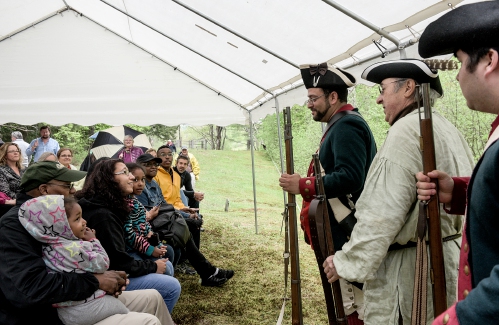 Plainfield – The descendants of Derrick Oxford and the white man who owned him shook hands at Coryville Cemetery on Saturday, where they gathered to commemorate the War of Independence veteran who fought for the freedom of the colonies while his was in doubt.

The US Department of Veterans Affairs recently ordered a new gravestone for Oxford, after new research revealed he was likely buried under a mossy and weathered stone in Ladieu Road Cemetery.

Descendants of Oxford have come to remember him, including Bonita Johnson of Bridgeport, Connecticut, who said she was Oxford’s fifth great-granddaughter.

Johnson said her family were inspired by the Oxford example, although they only recently learned of their ancestor’s existence.

â€œHe was in a struggle for himself, but he was thinking of others rather than himself,â€ she said after the ceremony.

After combing through historical documents, researchers from Johnson and Upper Valley, like Jane Stephenson of the Plainfield Historical Society, discovered that Oxford had been enslaved by the Gallup family of Stonington, Connecticut, in the middle from the 1700s.

He moved north with the family to Hartland in 1775. A few years later, military rallies show him in the 1st New Hampshire Regiment, which distinguished itself in the crucial battles of Ticonderoga and Saratoga.

â€œThere’s still a lot we don’t know about Derrick,â€ Stephenson told a crowd of at least 50 people under a tent in light rain.

This includes whether Oxford was liberated or not, when he died, and even how he chose the name “Oxford”. Military records show that he left the Continental Army on sick leave before it wintered at Valley Forge, and returned towards the end of 1778, remaining until July 1780. The British retired. traveled to Yorktown the following year.

Oxford then joined the Vermont militia, then moved to Plainfield. But otherwise, information about it is scarce. He does not appear on the 1800 census, so researchers assume he died after 1790. The New England states began to abolish slavery around this time, but no postage records for Oxford are ‘has still been found.

New Hampshire 1st Regiment’s War of Independence actors were on hand to honor Oxford on Saturday.

Lorenzo Arredondo, a teacher from Fremont, NH, said he and the regiment took pride in preserving the memory of an African American soldier, given the unique struggles they faced in the War for Independence.

â€œTheir memories are just whispers in the wind, and they’re not really thanked for their service,â€ he said.

With that, three Continentals arranged themselves next to the gravestone.

In two volleys, a single musket seemed to explode. Earlier, Arredondo had noted this possibility, given the rain. â€œWe warned you,â€ he said.

After the ceremony, Stephenson introduced Johnson to Cindy Roberts, a Gallup descendant who lives in Vermont.

Standing among worn, rain-strewn gravestones, they shook hands and exchanged pleasantries for a while.

â€œThanks for coming,â€ Johnson said with a smile. “It was really nice to meet you.”

Roberts, from Rutland Town, was among several Gallups in attendance. She said the news of Oxford and his ancestor made her want to learn more about her family history.

â€œAll of this is an eye opener for me,â€ she said.