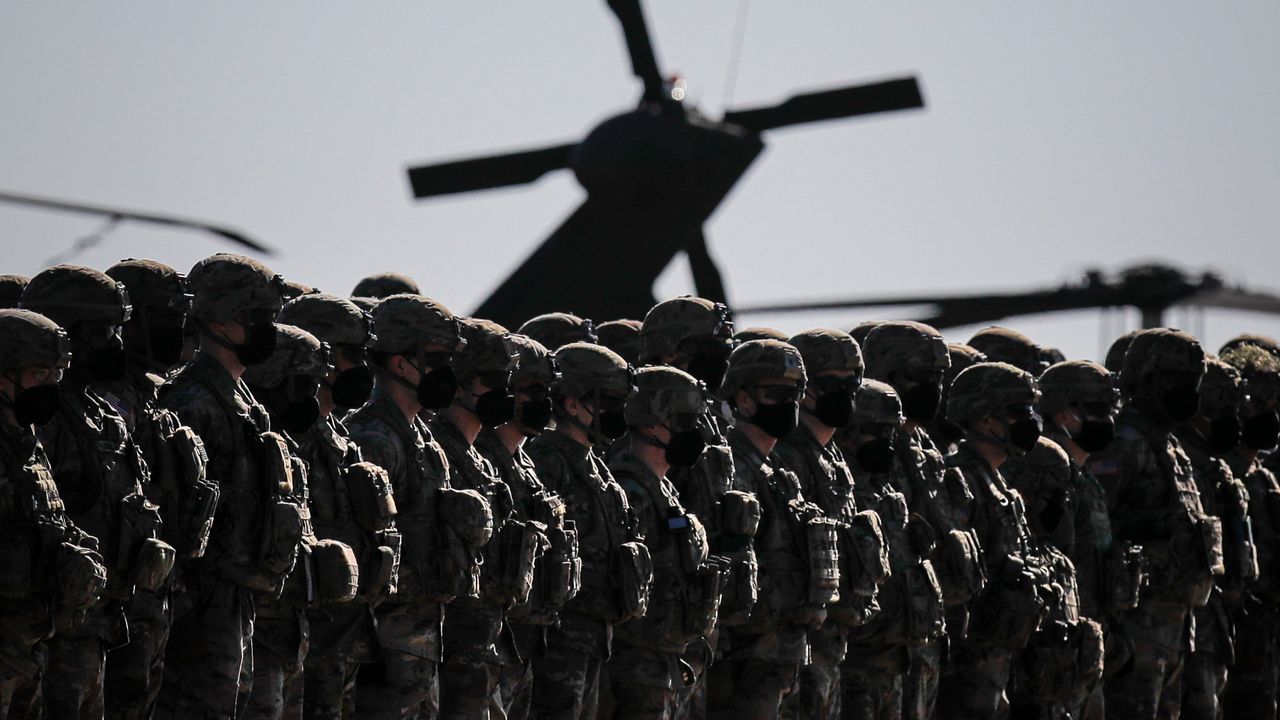 As Washington and its NATO allies strive to encircle Russia militarily, US officials said yesterday that a US-Russian war was imminent.

Yesterday, Washington announced the deployment of 3,000 troops from the 82nd Airborne Division to bases in Poland, which borders Ukraine. Britain and Germany will send hundreds of troops to reinforce NATO battlegroups in Estonia and Lithuania. This comes after NATO countries for weeks delivered Javelin anti-tank missiles, Stinger anti-aircraft missiles and Turkish TB2 Bayraktar drones to the Ukrainian regime in Kiev.

The narrative that NATO peddles – that it is acting to defend Ukraine against Russia – is a pack of lies. Ukrainian President Volodymyr Zelensky has publicly stated that Russia’s military stance is not compatible with plans for a full invasion of Ukraine. Moreover, when reporters challenged US claims that Russia was planning an attack, State Department spokesman Ned Price could do nothing but argue that “intelligence information “undisclosed meant his claims were true.

Nearly two decades after Washington invaded Iraq based on lies that it possessed ‘weapons of mass destruction’, US imperialism and its NATO allies are concocting a strategy to start a war with Russia , a nuclear-armed power, under conditions where they can blame Russia for it. Reports of increasing Ukrainian military activity in the Donbas region suggest that a NATO-backed military provocation may be staged there to trigger war.

Yesterday US National Security Adviser Jake Sullivan said Russia was “in a position to be able to mount major military action” and declined to elaborate, saying: “I will not comment on the details of our intelligence information. But I want to be clear, it could start during the Olympics, despite much speculation that it won’t happen until after the Olympics. Based on this, Sullivan urged American citizens in Ukraine to “leave as soon as possible “.

Significantly, Sullivan added that the NATO alliance had entered into very detailed planning for a confrontation with Russia. He said: “We have achieved a remarkable level of unity and common purpose, from overall strategy to technical details. If Russia continues, her long-term power and influence will be diminished, not enhanced by an invasion. It will have to face a more determined transatlantic community.

This followed a statement by Biden the day before calling on US citizens to leave Ukraine, adding that “things could quickly get crazy” and that a US-Russian conflict would be a “world war“.

This strategy is coordinated with the European powers. Yesterday, Biden’s emergency appeal went to Prime Ministers Boris Johnson (UK), Justin Trudeau (Canada) and Mario Draghi (Italy); Presidents Emmanuel Macron (France), Andrzej Duda (Poland) and Klaus Iohannis (Romania), German Chancellor Olaf Scholz and EU and NATO officials. According to a White House report, they pledged “to impose massive consequences and severe economic costs on Russia, should it choose military escalation, and to continue to strengthen the defensive posture on the eastern flank of the NATO”.

US officials insist the war could start next week, The Spiegel reported, stating that “the CIA and the US military informed the German government and other NATO states on Friday that they fear, based on new information, that the attack could take place as early as next Wednesday. “.

Yesterday at Romania’s Mihail Kogalniceanu Air Base, NATO Secretary General Jens Stoltenberg promised to strengthen Eastern Europe. Of an upcoming summit in Madrid, he said, “next week NATO defense ministers will meet and discuss how we can further strengthen our presence in the eastern part of the Alliance, including with new battlegroups. And I welcome France’s offer to lead a NATO battlegroup here in Romania.

A war would be the product not of Russian aggression but of the aggressive response of the imperialist powers to the Stalinist dissolution of the Soviet Union in 1991. Over the past 30 years, Washington has sought to establish its global primacy by dominating the Middle East and Central Asia. . NATO has fought wars, including in Iraq, Afghanistan, Pakistan and Syria, that have cost millions of lives and billions of dollars.

Russia and, increasingly, the growing economic weight of China have become major obstacles to this strategy. In 2013, Russian warships based in Sevastopol in Crimea clashed with NATO warships threatening to bomb Syria, after which NATO backed down. Alongside Iran, Russia then stepped in and defeated NATO-backed Islamist militias in Syria, whose government has now joined China’s Belt and Road global industrial infrastructure project.

In 2014, shortly after Russia helped prevent a direct NATO intervention in Syria, NATO powers backed a putsch in Kiev, where far-right militias overthrew a pro-Ukrainian president. -Russian and set up a NATO puppet regime. As these militias backed by NATO mercenaries attacked Russian-speaking regions of Ukraine such as Donbass and Crimea, these regions broke away from Ukraine, with Crimea voting to join Russia. Since then, far-right Ukrainian militias have clashed with Russian troops in Crimea and Russian-backed militias in Donbass.

The conflict between NATO and Russia has escalated again after NATO’s humiliating defeat in Afghanistan last year. The alliance is now redeploying towards Ukraine, seeking to seize a large swath of territory around the Black Sea, the Caucasus and the Caspian Sea. This would allow them to isolate and threaten Russia, cut off Russian military aid to the Middle East and intervene in Central Asia to the western borders of China. This plan is set in motion in Ukraine.

The Russian-speaking regions of Ukraine report very advanced NATO war preparations. Yesterday, the leader of the Donetsk People’s Republic (DPR), Denis Pushilin, cited Biden’s call for American citizens to leave Ukraine, warning that war was imminent. “The American president, probably, given the American influence in Ukraine, has information that allows him to make such statements and take such a position. … Ukraine can attack at any time. Ukraine has prepared everything for this: the concentration of forces and means allows it to be done at any time, as soon as a political decision is taken.

Such deployments violate the 2015 Minsk Accords, which temporarily froze the Ukrainian conflict and sent the Organization for Security and Cooperation in Europe (OSCE) to monitor the front line. Basurin, however, said that Kiev regime forces are using electronic jamming to prevent OSCE monitors from using drones to observe these deployments. “It seems that the OSCE monitors are content with a situation where it is impossible to register violations by Ukraine,” he said.

Significantly, DPR forces warned last month, based on their sources in Kyiv, that they expect an attack to occur as soon as the Ukrainian armored assault brigades are assembled and in position.

On January 28, Basurin said: “According to our intelligence, the Ukrainian General Staff, under the guidance of American advisers in the Ukrainian Ministry of Defense, is finalizing a plan for offensive operations in Donbass. The date of the aggression against the people’s republics will be fixed when the attack groups have been created and the plan of the operation approved by the National Security and Defense Council of Ukraine.

These are conditions under which NATO could push Russia, a nuclear power, into war. If such an attack were to begin, DPR forces would likely need Russian military assistance to avoid being overrun by far-right Ukrainian militias, which call for killing Russians and have bombed Russian-speaking Ukrainian towns near Russian borders. If Moscow intervened against this, however, it would provide grounds for NATO war propaganda, denouncing Russian aid to the DPR as an “invasion” of Ukraine.

The decisive question is more than ever the building of an international movement of the working class against the growing danger of a world nuclear war. It cannot be opposed on the basis of Russian nationalist militarism, to which imperialism offers only the alternatives of total capitulation or total war. The broad opposition to militarism in the working class must be mobilized on an international basis, in a struggle against imperialism and for socialism.

After three decades of wars led by the United States, the outbreak of a third world war, which would be fought with nuclear weapons, is an imminent and concrete danger.

It may be pure propaganda, but this British war film is one of the greatest ever made