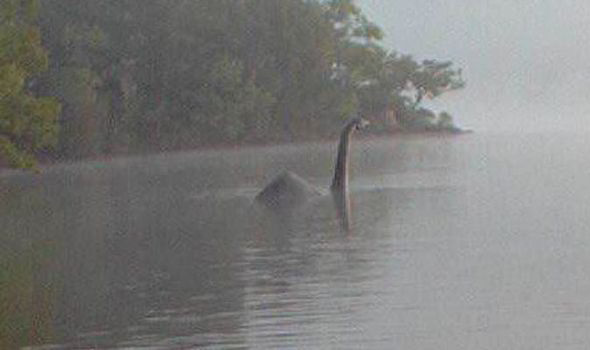 Now unpublished documents can reveal that when London banked on the Loch Ness Monster landing in the 1930s, big game hunters weren’t the only ones sharpening their harpoons to kill it.

In fact, the normally reserved natural history museums of England and Scotland were also on their toes … over who would get the carcass, while the newly revived Scottish nationalist movement feared the monster’s corpse could be put on it. show in London.

The story was uncovered by Sheffield-based author David Clarke for his new book, Britain’s X-traordinary Files.

Clarke was already familiar with the Nessie Files in Edinburgh, but was “astonished” to find another set in the Natural History Museum. “Many influential people, including MPs and famous naturalists like Sir Peter Scott, believed in Nessie’s existence and there was a lot of pressure put on the Scottish Office to give her special protection,” he said. declared.

Indeed, when sightings resumed after the war, the Duke of Edinburgh suggested bringing in the Royal Navy to solve the mystery.

“During the 1930s, the monster became an important symbol for Scottish nationalists who wanted the police to protect the creature from big game hunters,” Clarke adds. “Nessie had become a Scottish icon, a symbol of national identity. There was genuine outrage at the possibility that the monster’s corpse could be on display in London. “

In 1934, the Natural History in Museum in London and the Royal Scottish Museum in Edinburgh wanted Nessie dead or alive. Yet while Scotland hoped the bounty hunters could be kept at bay long enough for new laws to be passed to protect the creature, London preferred it be shot on sight.

The Scottish Office opened a file on the monster in December 1933 after it was bombarded with press inquiries.

Now “Nessie files” have also been found in the Natural History Museum, and the recently revealed content does not support Anglo-Scottish relations.

In March 1934, an anonymous National History Museum official, responding to a question about the museum’s policy on Nessie, made no secret of how they thought the bounty hunters should treat the creature.

His message was very clear: “If you ever get close to the ‘Monster’, I hope you won’t be deterred by humanitarian considerations from shooting him on the spot and sending the carcass to us in a cold storage, ahead.

“Other than that, a fin, a jaw or a tooth would be welcome. “

According to other files found in Edinburgh, pressure was already mounting for a special act of Parliament to prevent Nessie from being killed or captured.

The campaign was led by Inverness MP Murdoch MacDonald, who assured Secretary of State Sir Godfrey Collins that the creature was not a myth.

“The proof of his presence can be taken as unmistakable. Far too many people have seen something abnormal to question its existence, ”he wrote.

He demanded that a bill be introduced in Parliament to protect the creature and asked Sir Godfrey what could be done to prevent him from any harm in the meantime.

The advice Sir Godfrey obtained was not exactly encouraging for those who wanted to save the monster from an aquatic grave, or at least prevent England from claiming the remains.

Officials informed him that there was “no law for the protection of monsters” and that “large fish, including those without a known name, can be claimed by the Crown.”

By this time, the threat to Nessie had reached the ears of the patrons of the Royal Scottish Museum.

In 1934, they wrote to the Secretary of State for Scotland, staking Edinburgh’s claim to the carcass.

“The museum strongly insists that the RSM have reversion rights to the ‘Monster’ if and when its corpse becomes available,” argues the letter.

“We believe the Monster should not be allowed to find its final home in England.

“Such a fate would surely outrage Scottish nationalism which at this time is thriving greatly under the beneficent influence of the monster.”

By 1938, the threat to Nessie was becoming very real. Inverness Police Chief William Fraser had stationed officers around the Loch, but Sir Godfrey had said officers could do nothing more than enforce existing laws on trespassing and the use of handguns. fire on private property.

Meanwhile, big game hunter Peter Kent had announced that he intended to hunt down the monster with a force of 22 men and a specially designed harpoon gun.

The stop of these expeditions was brought about by World War II, during which Loch Ness was patrolled by the Royal Navy.

A new wave of sightings would breathe new life into history throughout the 1950s, culminating in 1960 when aeronautical engineer Tim Dinsdale shot Nessie’s best-known movie footage. By this point, however, London’s scientific interest had already cooled.

In October 1959, the Natural History Museum wrote to employees warning them that administrators “do not approve of spending official time or official holidays on the so-called Loch Ness phenomenon.

“They have no intention of restricting the granting of special leaves for approved purposes, nor of interfering with the way Museum staff members spend their private leave,” the letter continued.

“They take this opportunity to warn all concerned that if, due to the activities of staff members, the museum becomes involved in unwanted advertising, they will be gravely unhappy.”

The museum’s disapproval hasn’t stopped naturalists from publicly supporting the creature’s existence, however.

Sir Peter Scott, son of Captain Scott of Antarctica and Olympic Navigator and Vice President of the World Wide Fund for Nature, said there was not one but a whole family of plesiosaurs living in the Loch.

In 1962, the director of the Natural History Museum, Sir Terence Morrison-Scott, had opened his own dossier on the phenomenon.

Sir Terence was lukewarm about the whole idea and was concerned about what he called Conservative MP David James’ ‘Nessie obsession’.

James had met Prince Philip to discuss his Loch Ness project earlier in 1962 – and the Duke encouraged him to contact the Royal Navy for help.

Sir Terence wrote: “He has spoken to the Duke of Edinburgh about his plans, has tried to get the support of Sir Solly Zuckerman (Chief Science Officer of the Department of Defense) and will no doubt continue to explore all avenues. leading.

“I don’t think he, or anyone else, is able to get the support of the Museum yet.

“There needs to be much more convincing evidence that there really are big beasts in Loch Ness. It’s up to David James to provide the evidence.