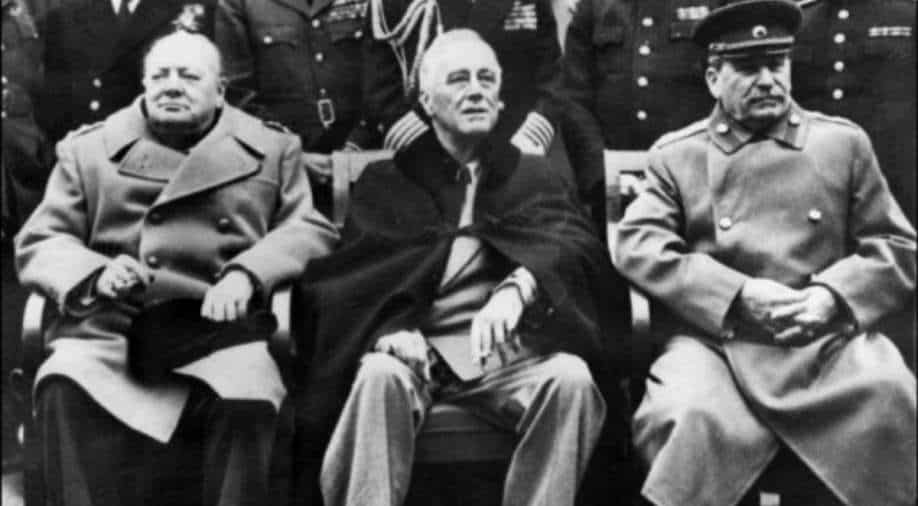 Immediately after (if not during) World War I, Britain began to decline as the world’s sole superpower. This process slowly and steadily gained momentum after the end of World War II in 1945 with the horrific atomic bombings of Hiroshima and Nagasaki in Japan. After the war, it was absolutely clear that Britain could no longer enjoy the hegemonic global weight it once had for nearly two centuries.

And then there were two…

After World War II ended in 1945, a new geopolitical standoff began. Two new clear and undisputed superpower contenders have emerged in the form of the United States (United States of America) and the USSR (Union of Soviet Socialist Republics) or the Soviet Union.

The fiery and uncompromising determination of these two great powers to take ‘first place’ has sparked an arms race alongside a dangerously pursued spy game that has earned itself a nickname-‘Cold War‘.

Although the United States (or US) and the USSR did not engage in any kinetic action, the world scene remained extremely tense in the period that followed.

The United States and the USSR during the 1960s and 1970s flexed their muscles with zeal and ambition in different strategic theaters with the aim of overtaking or surpassing the other.

The most important of these theaters were:

Rise of the United States

Eventually, the United States’ sphere of influence over nations around the world grew phenomenally, due to the technological prowess it possessed and indeed exploited very cleverly.

In the mid-1970s, America’s pockets deepened after it pushed its currency (USD) on global energy trade in the form of petrodollars. The United States has made the US dollar the reserve as well as the most “sought-after” currency in the world.

In a nutshell, liberal America was making huge strides in areas like the economy, technology, and diplomatic influence.

A Soviet strategy that kept the world bipolar

On the other hand, the Soviet Union, which was a “state ruled by an iron fist”, faced unpromising economic growth and could not match American technological and economic gains.

However, after assessing the military technology sophistication differential with the United States, the Soviets quickly realized that “quantity has a quality of its own.”

The Soviet Union, due to the slow progress of its economy and an inevitable pressure to keep pace with the United States, began to focus more on expanding its arsenal based on “technology within reach”. of labor” rather than on R&D spending in the proportion the United States was comfortably doing.

It should be noted that while the Soviets struggled to align themselves with superior US military ammunition, economy, global technology, and global influence; what kept the United States in check or, in other words, kept the world in a “bipolar state” rather than a unipolar world led by the United States, was the supply chain and the USSR’s indigenous production ecosystem for defense manufacturing.

This ecosystem was complete and self-sufficient in its own right, with no problem sourcing or outsourcing the materials and components needed for large-scale local production in the defense manufacturing sector.

Interestingly, the same ecosystem (although considerably refined) also exists in today’s Russia. It is this ecosystem that has mainly enabled Russia to annex Crimea, to make an active incursion into the Syrian theater of war and, above all, to launch an invasion of Ukraine in February this year.

The Soviet-Afghan War and Pakistan’s Role in It

As fate would have it, the Soviet invasion of Afghanistan in the late 1970s backfired massively on the communist ruling cadre who was already under enormous economic pressure.

While the United States was still trying to find a way to thwart the Soviet Union’s ambition to expand beyond Central Asia to its south, a strategic broker and facilitator emerged in the form of the Pakistan. General Zia-ul-Haq, chief of staff of the Pakistani army and head of state from 1978 to 1988, agreed to offer Pakistani assistance to the United States to create an armed group of anti-Soviet fighters. These fighters became known as Mujahideen, which translates to Holy Warriors.

Trained or “prepared” by the Pakistani military and armed with the latest weapons supplied by the United States (especially Stinger anti-aircraft missiles), the mujahideen inflicted enormous damage on the Soviet agenda and advance in Afghanistan. Eventually, the US-led proxy war forced the Soviets to withdraw from Afghanistan. The process of retreating Soviet forces began in May 1988 and was completed in February 1989.

This would not have been possible for the United States without the help of Pakistan, which explains the huge sums of money he received from the United States in the name of “aid” which was essentially compensation “services provided”. This so-called aid continued to flow even after the Soviets withdrew and was used by Pakistan to fuel, feed and export terrorism to India, focusing mainly on Jammu and Kashmir.

Disintegration of the USSR

After being defeated in Afghanistan, the troubles of the USSR, especially in the economic sector, grew and unfolded to such proportions that forced the Union of 16 republics (including Russia) to disintegrate. All member states split into independent republics, with Russia remaining the strongest of all.

Yet, once the USSR completely disintegrated in 1991, the United States became the world’s unchallenged and unchallenged superpower, as a lonely and economically struggling Russia could no longer challenge the victorious United States.

Welcome to a multipolar world!

The United States finally achieved its long-held goal, but only enjoyed the coveted status for two decades (the 1990s and the first decade of the current century) as its “honeymoon period” ended when a belligerent China some time after the Beijing Olympics began to openly challenge its status as the sole superpower.

However, unlike the Cold War era, today’s world is not bipolar. With nuclear powers like India, France and Russia having a certain unavoidable geopolitical weight, today’s world has become a “multipolar” world!

You can now write for wionews.com and be part of the community. Share your stories and opinions with us here.