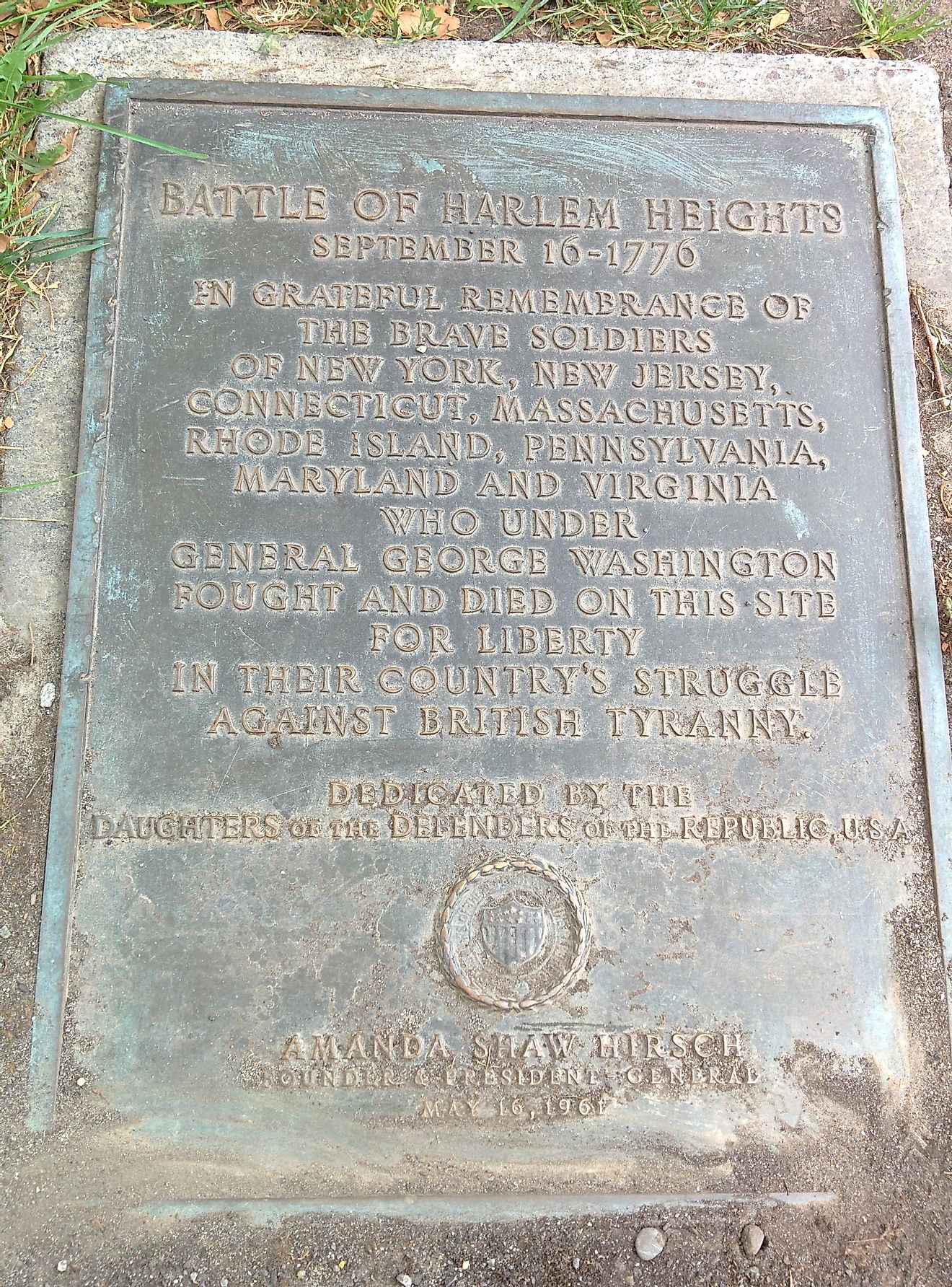 The Battle of Harlem Heights took place on September 16, 1776 during the United States War of Independence (175-1783) in what is now the community of Morningside Heights on Manhattan Island in New York City. General George Washington at the time had been defeated at the Battle of Long Island and was retreating to Harlem Heights to avoid the pursuit of General Sir William Howe and his colleague Alexander Leslie. The battle was between American forces and British forces who had combined their forces with the Germans under General Howe. Washington organized its Continental Army to respond to any attack from Sir Howe and his army of about 4,000, who had landed the day before in the Kip Bay area of â€‹â€‹Manhattan. On September 16, 1776, General Washington sent a group of 150 rangers led by Lieutenant Thomas Knowlton and General Joseph Reed to investigate the location of the British Army and eventually engage them in combat.

George Washington, Intelligence and Light Infantry Ranger Officer Thomas Knowlton and Major General Nathanael Greene led the outnumbered Mainlanders against a British force of around 5,000 after reinforcements arrived. The British were commanded by William Howe and Alexander Leslie. Despite the presence of ships and larger guns in and around Manhattan Harbor, the battle was more or less fought by infantry and light infantry skirmishers.

The Battle of Harlem Heights took place over hilly terrain, where fighters continually fought to gain heights from each other. As Knowlton and his men engaged the British soldiers in a frontal assault, Knowlton sent a second group of about 1,000 patriots to attack the enemies. Americans had become angry at the British Army’s mockery of them, for example by using fox hunting calls and playing “Gone Away,” a melody that sounded when a fox had been killed and that a hunt was over. The new fighters split into three companies of Virginia Continentals, in addition to the specialized “Rangers” under Knowlton, and moved towards the British along their southern flanks on the right side. They had been ordered to open fire on the British once they were directly behind them. Something went wrong with the plan, and American forces turned west too soon, attacking the British from a disadvantaged position, compromising their tactics. Despite the mishaps, American forces succeeded in forcing the British to withdraw from their positions in the north of the region. American forces pushed the British army out of a field and up a hill. Upon reaching the hill, US forces received reinforcements in the form of rifles and other armaments. Having gained significant ground in their pursuit, the Americans forced the British to retreat to a nearby buckwheat field.

The battle resulted in the deaths of around 70 British soldiers and around 30 American soldiers, including the loss of Lieutenant Knowlton. About 100 American soldiers and 390 British soldiers were wounded in the battle. Although the Mainland claimed victory, British reinforcements stopped the American pursuit of the British and eventually forced the hand to occupy vulnerable positions in Pennsylvania after the subsequent defeats of the New York and New Jersey campaigns.

Although General Washington was not entirely satisfied with the way the battle had ended, he was happy to have achieved his very first victory on the battlefield of war. The soldiers were also delighted to have instilled significant fear into a formidable British force. The victory was significant as the Virginia militias, which had been forced to flee by British forces in a battle the day before, managed to fight alongside the Northern Rangers and retaliated against the British. The victory of American forces in the battle helped restore public confidence in the Continental Army. It also boosted the morale of the soldiers themselves and helped them continue the battles that followed during the US War of Independence. Nonetheless, Knowlton’s death and the disturbed movements of the Continental Army following the battle rattled Washington’s forces and took months to recover. The site of the battle is now near Columbia University.

The Battle of White Plains: The American War of Independence

The Battle of Saratoga: The American War of Independence