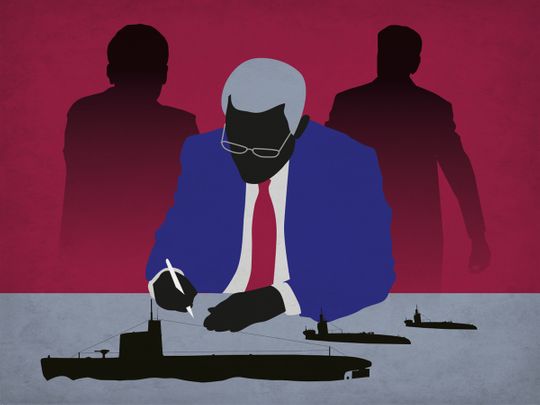 During the days of Donald Trump’s erratic reign, it was quite normal to see a crisis in relations with the traditional allies of the United States in Europe day after day. The former president adopted a strict “America First” policy that not only angered Washington allies, but also raised questions about America’s leading role in a multilateral world. theoretically more globalized.

Joe Biden was supposed to be different. He went to the White House on the slogan of multilaterism and “restoring American leadership” on the world stage. The relationship with Europe, he said, has been strong for decades and will remain a fundamental part of US foreign policy.

However, it wasn’t long before Biden stabbed France in the back. “We have a crisis,” a French official said at a press briefing on Friday. Here is what happened.

Australia was supposed to buy $ 90 billion worth of military submarines from France – 12 of them – to boost its capabilities in an increasingly tense area. The agreement was signed in 2016. The two countries, usually good friends, have met regularly to finalize the contract and the technical specification.

The last meeting took place on Wednesday, September 15, just hours before the Australians publicly announced that they were canceling the French deal in favor of a new deal on US nuclear-powered submarines.

The French were shocked. They were “betrayed” by Australia, according to Foreign Minister Jean-Yves Le Drianm who had “optimistic” talks two weeks ago with Australian officials on the progress of the agreement. On Friday, France angrily took the unprecedented step of recalling its ambassadors to the United States and Australia “for consultations”.

France has not taken this step, even at the lowest of its relations with the United States during Trump’s time, when the former president frequently mocked French leader Emmanuel Macron and other European leaders.

French Minister Le Drian said the recall of the emissaries was “justified by the exceptional gravity of the announcements” made by Australia and the United States of the cancellation of the agreement on French submarines.

A French diplomat told The Associated Press that all of this raises “a strategic question about the very nature of relations between Europe and the United States over the Indo-Pacific strategy”.

A crisis? Certainly. However, French anger is not the main story. The cancellation of the deal is actually a spectacle that has somewhat overshadowed the real spectacle – the Indo-Pacific Security Partnership Pact signed by the United States, Britain and Australia on Wednesday. . The agreement on American submarines, which led to the cancellation of the French contract, is part of the new strategic alliance. It is an important part, but it is not the essential.

Biden had opposed Trump’s “America First” policy as isolationist, reckless and offensive to traditional allies. However, he got off on the wrong foot economically with his plan to increase the interest rate and phase out financial incentives linked to the impact of Covid-19.

These decisions have resulted in slower growth and uncertainty about the economic recovery that began in the final months of the Trump presidency. The debacle in Afghanistan has fueled criticism that the Biden administration is naive and weak despite the so-called dream team of foreign policy experts the president has assembled in his cabinet.

And that is why the history of Australia matters. In an attempt to prove his badass credentials, Biden takes on the obvious target – China. And US measures against China usher in a cold war, Beijing warned. The main objective of the new security pact is to deal with the growing Chinese influence in this region.

Over the past two decades, US political experts have warned of heightened tension between the United States and Russia that could lead to a new Cold War. Until recently, few people expected the Cold War to actually be waged against the future great world power, China.

Trump has attempted to slow China’s economic and technological advances by imposing non-literal sanctions on who and who in the Chinese tech industry. He started what is now known as the US-China trade war.

In response to what Trump described as “China’s unjust economic policies,” the United States in 2018 launched a series of punitive actions that included new tariffs, restrictions on China’s access to American goods technology, restrictions on US investment in the Chinese technology industry.

Biden’s victory in the 2020 election raised hopes in the American business community that Trump’s anti-China policies would be abandoned and that the new administration would restore trade relations with Beijing.

However, what started as a trade war developed under a new president desperate to improve his image in a cold war, “a battle between the usefulness of democracies in the 21st century and autocracies” in the words of the president. Biden. And the first blow in this battle was the security pact with the UK and Australia.

Biden calls the US nuclear submarine pact and deal “the biggest strategic step Australia has taken in generations.” China called it “the old cold war mentality”.

The new cold war has officially started. France, for its part, has just been caught between two fires.