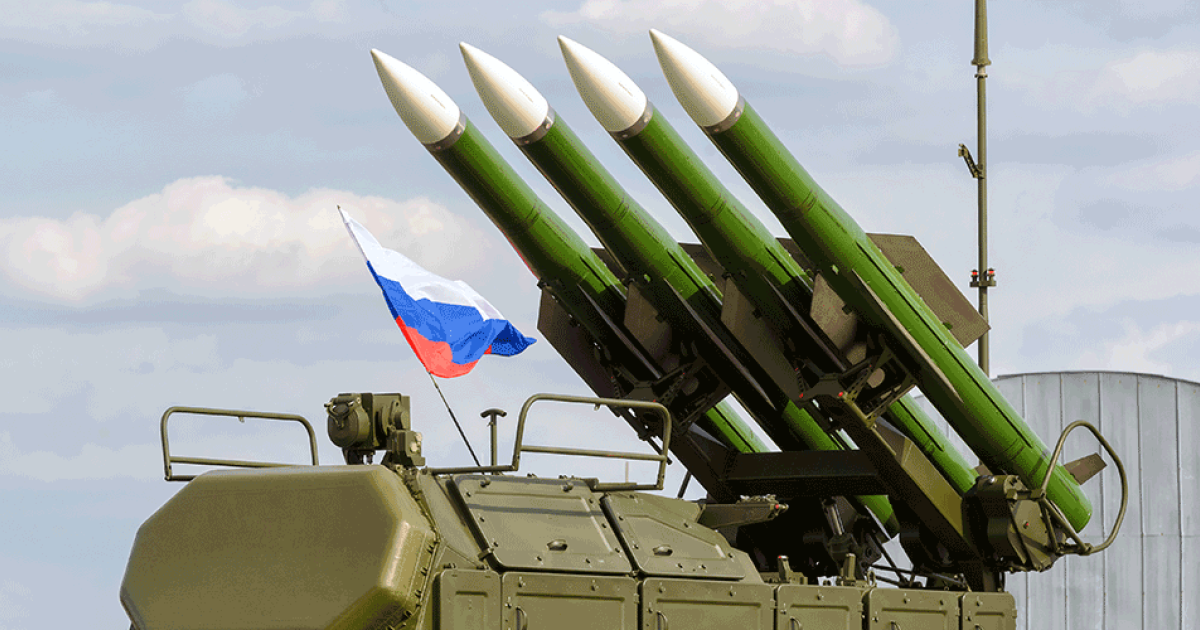 As the United States convened a meeting of 40 nations in late April to coordinate its military aid to Ukraine, Russia responded with new nuclear attacks. Foreign Minister Sergei Lavrov, echoing earlier statements by President Vladimir Putin, accused the United States and NATO of waging a “proxy” war against Russia in Ukraine and claimed that the risk of nuclear war is now “considerable.” While President Biden called Russian comments on nuclear war “irresponsiblewarned CIA Director William Burns, “Given the potential despair of President Putin and the Russian leadership, given the setbacks they have faced so far, militarily none of us can take the slightest the threat posed by a potential recourse to tactical nukes or low-yield nuclear weapons.

The instability of the Ukraine crisis is unfolding during a time when emerging developments are eroding strategic stability in the nuclear deterrence relationship between the United States and Russia. This confluence threatens to recast and elevate two traditional dangers of the bipolar Cold War era.

Throughout the nuclear age, US deterrence strategy has focused on limiting a low-probability, high-consequence event. While the likelihood of Russian nuclear use remains low, the war in Ukraine has raised that risk to a level not seen since the most difficult times of the Cold War. While Putin warns that any Western interference in Ukraine will be met with a “swift like lightningRussia’s response, the crisis carries a risk of escalation, such as a geographical spillover of the conflict beyond Ukraine’s borders.

Crisis stability and strategic stability are linked: strategic stability has been defined by US administrations as the absence of incentives to use nuclear weapons first in a crisis. With the near total collapse of the arms control architecture of the past fifty years, the two great powers are now locked in an unconstrained arms race through their nuclear modernization programs (including the development of a new generation of strategic nuclear systems, tactical nuclear weapons, and hypersonic missiles), as well as expanding their competition in the emerging fields of cyberspace and outer space.

The first danger of a reshaping and elevation of the Cold War in this emerging strategic environment is the relationship between nuclear deterrence and the possibility of conflict at lower levels on the continuum of military force. After the United States and the Soviet Union acquired thermonuclear weapons in the early 1950s, British strategist BH Liddell Hart speculated: “To the extent that the H-bomb reduces the likelihood of full-scale war, it increases the possibility of a limited war. by generalized local aggression. Political analysts would later call it the “stability-instability paradox– that strategic stability at the nuclear level could generate instability by encouraging rival powers to seek tactical gains by non-nuclear means in regions peripheral to the central conflict in what was then called the “Third World”.

But even with the ideological layering of the Cold War, these stakes were less than vital, and the conflicts usually involved one superpower against the proxy forces of the other (e.g., Soviet support in the North during the Vietnam War, American support to the Afghan mujahideen by the Carter and Reagan administrations). These constraints have considerably mitigated the risk of escalation. By contrast, the potential hotspots between the United States and Russia are not peripheral but vital interests.

The invasion of Ukraine by Russia has revived the debate on the revenge intentions of Vladimir Putin. The scale of the Russian invasion – and the Russian dictator’s original aim of regime change in kyiv – accompanied by nuclear saber-blasts is unprecedented and, worryingly, geographically boundless. The Kremlin has asserted the right to “protect” ethnic Russians and Russian speakers beyond the borders of Russia (which it says has some 25 million people) and has even offered citizenship to millions of Russians from strain living in the neighboring former Soviet republics, including the three Baltic states. who are members of NATO

The second danger resurrected from the Cold War era are the threats to stability from nuclear deterrence. RAND Corporation strategist Albert Wohlstetter challenged the assumption of an inherently stable nuclear deterrent in a 1959 report. Foreign Affairs article, “The delicate balance ofTerror.” Wohlstetter’s concern then was the vulnerability of US nuclear forces to surprise attack and the fact that in the event of a crisis, Kremlin leaders might perceive an incentive to come first – to launch a preemptive strike. This dynamics led to the Cuban Missile Crisis.The Soviet deployment of medium-range ballistic missiles over Cuba to target the east coast of the United States was a desperate attempt to restore strategic balance with the United States and precipitated the most dangerous crisis of the Cold War. After the profound shock of this proximity to Armageddon, the Soviet Union began to match the American deployment of large numbers of second-strike secure nuclear forces. The crisis highlighted the potentially catastrophic consequences of a ‘delicate’ balance that prompted one side to come first.

Since the Cuban Missile Crisis, Retaliation Assured – Eliminating Incentives for a Surprise First Strike—was the sine qua non of strategic stability. The risk to the stability of the crisis is that the instability of the arms race could rekindle these incentives, making deterrent relations more “tricky”. With the advent of new technologies, escalation during a crisis could occur in a non-traditional realm – cyber or space – and could be mistakenly considered non-escalation because it would be non-kinetic. But an unintended spiral of escalation could be triggered by a Russian cyberattack to interfere with US communications with its nuclear systems or an attack on reconnaissance satellites to blindside the United States. Signs of this potential are already evident: Russia has conducted a anti-satellite missile test last November and, during the Ukrainian war, conducted extensive cyber attacksoften in coordination with its battlefield operations.

In the war in Ukraine, as in the Cuban Missile Crisis, unintended escalation remains a major risk. Putin is a risk-taker (whose agents used a military-grade nerve agent in a 2018 assassination attempt on a Russian military defector to Britain) and he is prone to miscalculation. His assumptions about Ukraine – that the conflict would be short and decisive, that the Zelensky government would retreat quickly, and that the West would be thoughtless in its disunity – were all miscalculations that ironically led many Western officials and analysts to conclude that it would threaten but not invade.

Given Putin’s propensity for risk-taking and miscalculation, the Biden administration is exploring scenarios in which Russian military “setbacks” and “desperation” (as the CIA director has warned Burns) lead to the use of chemical or nuclear weapons. Under what U.S. officials describe as Russia’s “escalation to de-escalation” strategy, Putin could redouble his efforts in the face of adversity by using a single weapon for demonstration effect: shocking Ukrainian leaders. and Westerners to join on terms favorable to the Kremlin. . Although the Biden administration has not established an explicit deterrent marker specifying the US response, a senior official warned that any Russian use of nuclear weapons would mean “all bets are off– a tacit signal that such a violation of the nuclear taboo could induce the United States and NATO to become directly involved in the war. The Biden administration could reinforce that chilling message, as the Stanford political science professor Scott Sagan recommended, communicating directly to the Russian military, that an order from Putin to use a nuclear weapon in Ukraine would be illegal, a violation of the Geneva Conventions, and should not be obeyed.

The challenges of crisis stability to prevent escalation are immediate and urgent even if the short-term prospects for a resolution to the war in Ukraine seem remote. US policy should focus on preventing an unintended escalation. Key to this imperative is maintaining an open line of communication with Russia’s military leadership. A worrying indicator of virulent relations between Moscow and Washington, Russia has rebuffed calls from Secretary of Defense Lloyd Austin and General Mark A. Milley, Chairman of the Joint Chiefs of Staff, to their counterparts.

Looking to a future beyond the war in Ukraine, the Biden administration and US NATO allies are already eyeing a revived version of diplomat George Kennan. containment strategy to deter and balance Russian power at its periphery, whether Putin continues to rule the Kremlin or not. Kennan’s 1947 plea for a strategy of “patient but firm and vigilant long-term containment of Russian expansionist tendencies” resonates today. As during the Cold War, such a strategy should provide a pragmatic way to engage with Russia on strategic stability to avoid the prospect of unconstrained and destabilizing arms competition.

In the midst of Europe’s first large-scale conflict since World War II, now is not the time to engage in such a dialogue on the broader challenges of strategic stability with Putin’s regime. Whether or not the new state of US-Russian relations should be described as a new Cold War, the two powers have a mutual interest in not looking back on the dangers of this era – ensuring that no of the parties has a perceived interest in going first and at the start of a crisis. The nuclear deterrence relationship should never again be “tricky”.

The most daring bombing mission since World War II