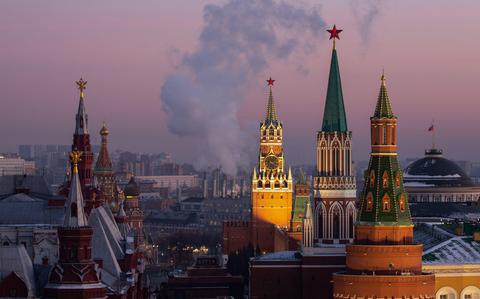 The Kremlin in Moscow on December 11, 2020. (Andrey Rudakov/Bloomberg)

The threat of a Russian military invasion of the rest of Ukraine represents the most serious military crisis and challenge in Europe since the Balkan Wars of the 1990s. The current substantial build-up of Russian military forces around that nation continues, worryingly.

Russian President Vladimir Putin continues to exploit the situation to increase his international visibility and attempt to bolster his deserved reputation at home as a strong and effective leader. Restoring order and stability after veritable anarchy in Russia following the collapse of the Soviet Union was key to his remarkably enduring tenure, which now exceeds two decades.

In the current situation, the United States has placed 8,500 troops on “high alert” for possible participation in allied military action over Ukraine. It is somewhat reminiscent of the confrontations with the Soviet Union over Berlin during the Cold War, but so far it is not at the level of the nuclear confrontation between the United States and the Soviet Union over Cuba in 1962 or the Yom Kippur War in the Middle East in 1973.

The Ukrainian crisis is also a long-term affair. In 2014, Russia seized Crimea and the eastern part of Ukraine. Crimea was part of Russia until Soviet leader Nikita Khrushchev transferred the peninsula to Ukraine in 1954.

Ukraine, which was historically part of Russia, became independent following the Russian Revolution which began in 1917. After World War II, the Soviet Union absorbed the nation. Independence returned after the collapse of the Soviet Union in 1991.

The open invasion of eastern Ukraine by the Russian military, after months of covert aid to rebel forces, has significantly undermined Europe’s cautious post-Cold War stability. The United States and European nations have an obligation to respond skillfully, while trying to avoid direct combat with Russian forces if possible.

The fall of the Berlin Wall in 1989, followed by the disintegration of the Soviet bloc of satellite states and then the Soviet Union, represented a historic strategic victory for the West. The end of the Cold War confirmed the policy of restraint and deterrence known as “containment”, endorsed by all Presidents of the United States, from Harry Truman when the Cold War began in Europe, to George HW Bush, who navigated on the end of the long term and extremely dangerous ideological, military and political conflict with exceptional diplomatic skill.

Truman and his associates led the formation of NATO (North Atlantic Treaty Organization) in 1949 to counter Soviet expansion into Western Europe. The Soviet Red Army conquered and occupied Eastern Europe following the titanic struggle and victory over Nazi Germany in World War II.

Moscow responded to NATO by establishing the Warsaw Pact, which disintegrated after the end of the Cold War. NATO endures.

Putin, undeniably a remarkable leader, generally plays his strategic cards well. However, his hand remains weak. The Russian economy is structurally vulnerable, heavily dependent on oil and plagued by corruption.

Opinion polls in Russia show that Putin’s popularity is declining. External power plays are clearly part of an answer. The very existence of serious opinion polls provides profound evidence of how much Russia has changed since the era of Soviet totalitarianism.

General war in Europe was averted for a century after Napoleon’s final defeat and the outbreak of World War I. A concert of European nations, brokered by Britain, was essential to the effort. The British government played a crucial brokering role in the creation of NATO.

Poland, a NATO member since 1999, is active in the collective effort to supply arms to Ukraine. Germany’s new coalition government led by Chancellor Olaf Scholz has been low-key, in stark contrast to its predecessor Angela Merkel so far.

President Joe Biden remains volatile and the chaotic departure from Afghanistan is a resounding failure, but the United States is strong. Russia is relatively isolated in Europe, and objectively weak.

Arthur I. Cyr is the author of “After the Cold War — American Foreign Policy, Europe and Asia”.