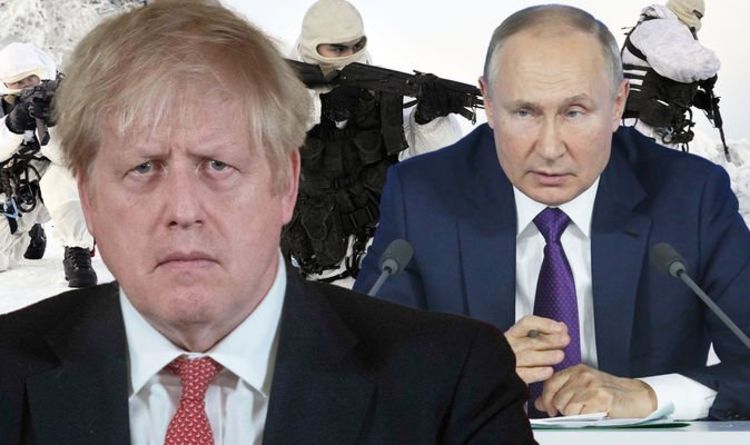 The Prime Minister, writing in The Times, said Britain’s biggest immediate priority was to stand with its allies and combine dialogue and deterrence to defuse the crisis. He said: “The military machine that President Putin is assembling dwarfs the force that seized Crimea and sparked war in eastern Ukraine in 2014.

“We are witnessing the greatest military build-up in Europe since the Cold War, which highlights the urgency of our task.

“But there are reasons for hope: whatever the shades of opinion between us, the West has agreed on a united response to any new Russian attack on Ukraine.”

Moscow denies plotting an incursion, but has demanded that Ukraine not be admitted to NATO’s military alliance.

Boris Johnson has described Russia’s military build-up as the largest in Europe since the Cold War. (Image: Getty)

Soldiers sit atop a military vehicle parked in front of the Polissia Hotel during tactical exercises. (Image: Getty)

Mr Johnson, who visited Kyiv last week, warned that the US and EU would impose ever-heavier economic sanctions on Russia if attacked.

He wrote: “We want our friends to have sanctions ready to be applied as soon as the first bit of the first Russian soldier crosses further into the sovereign territory of Ukraine. We will continue to push for this – and we are encouraged by the work of the allies so far.”

The Prime Minister added that UK sanctions would be ready for any new Russian attack, with the government asking Parliament for new powers to sanction a wide range of individuals and entities, including companies linked to the country or operating in a sector. of strategic importance to the Kremlin. .

He said: “No sector is more important than energy, which is why I said last November that a choice would soon arise between bringing more and more Russian hydrocarbons through giant new pipelines and the defense of Ukraine.”

Mr Johnson welcomed Germany’s statement that the Nord Stream 2 gas pipeline from Russia to Europe would be reviewed in the event of an incursion.

He added that NATO and the UK were ready to provide more support to ensure the security of NATO allies in Eastern Europe.

Britain’s contribution to exercises undertaken by the formation led by the United Kingdom Joint Expeditionary Force would also be enhanced.

And there was a promise that the West would do more to help Ukraine defend itself.

The UK has already sent 2,000 anti-tank missiles to the country and announced £88 million in aid to bolster Ukraine’s energy independence.

Mr Johnson’s remarks come as the Russian president has vowed not to carry out any new military moves near Ukraine for the time being as a precursor to possible de-escalation, according to a French official speaking under cover of anonymity after Mr Putin spoke to Frenchman Emmanuel Macron. .

The Russian leader also agreed that troops taking part in a military exercise on Belarusian territory near Ukraine’s borders would be withdrawn once these war games are over.

A Ukrainian soldier on the front line. (Image: Getty)

However, Mr Putin did not mention the concessions when addressing the media after six hours of talks with Mr Macron in the Kremlin on Monday night.

Mr Johnson told The Times that he struggled to understand how threatening Ukraine was furthering Mr Putin’s aim of drawing NATO forces away from Russia.

He wrote: “If he launches another invasion, he will force the West to bring about much of what he seeks to prevent. In fact, it is already happening. Due to its buildup, America, France, Italy and other allies are deploying forces on NATO’s southeastern flank, just as the United Kingdom is reinforcing the northeast.

“Nor could there be a more convincing argument for the necessity of NATO than the sight of Russian tanks once again invading a European country. would not be served by inflicting even more destruction and bloodshed on Ukraine.”

The Prime Minister claimed that Russian de-escalation of the crisis is the condition for a successful dialogue, adding that in two phone calls with Mr Putin he had underlined the price Moscow would pay for a new attack on Ukraine.

Mr Johnson said: ‘Britain’s commitment to the security of Europe – with NATO as its indispensable guarantor – will remain unconditional and unwavering.

The crisis in Ukraine dates back to 2013 when the country’s Russophile leader Viktor Yanukovych canceled plans to sign a deal that would have brought the country closer to the EU. It came after Mr Putin instead proposed a customs union with Russia, Belarus and Kazakhstan.

Yanukovych’s decision sparked civil unrest in Kyiv that led to his ouster, after which Russia annexed Crimea in a move denounced as illegal by a UN General Assembly resolution.

WWII and 5 Other Times DC Heroes Fought Nazis in Animation