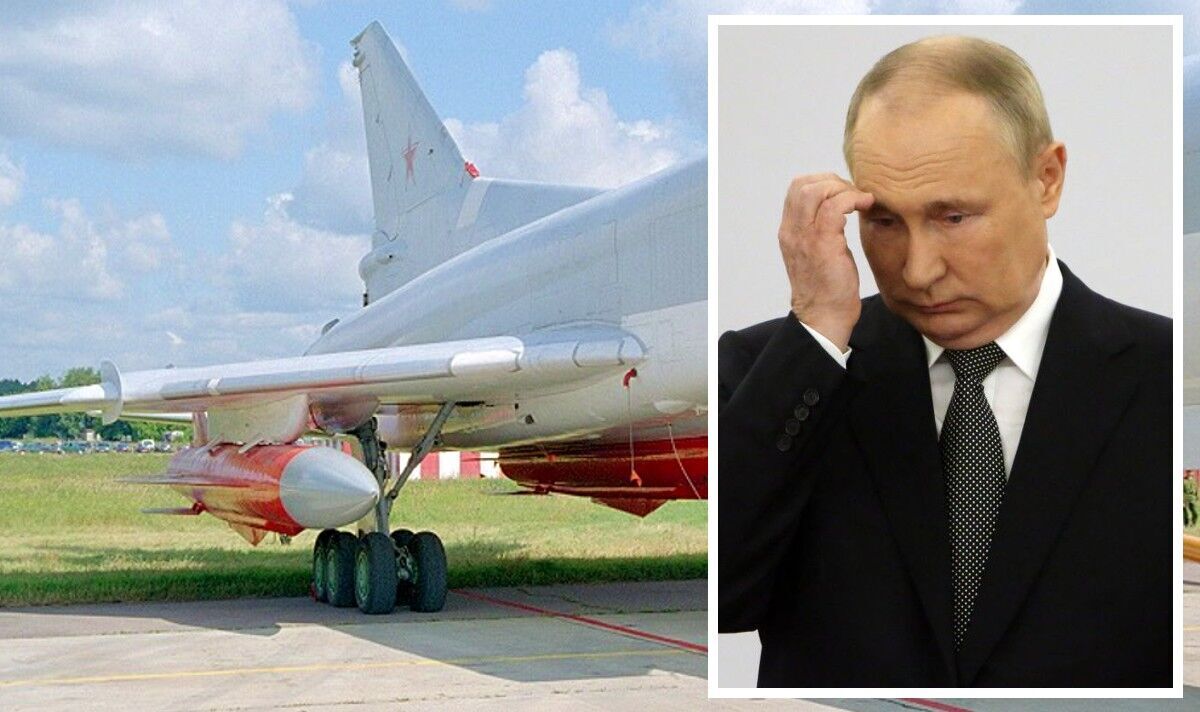 The news comes as Russian President Vladimir Putin’s army is becoming increasingly depleted following heavy casualties since the so-called ‘special operation’ in Ukraine. As Russia now strives to secure parts of eastern Ukraine, as well as strategic southern ports, the use of such weapons, designed to sink aircraft carriers, shows that Moscow is trying more than ever to push back the Ukrainian resistance.

The five-and-a-half-ton Kh-22 missiles have been described as “obsolete” having been developed in the 1960s.

However, their use is not without controversy as the missiles are highly inaccurate and cause severe “collateral damage and casualties”, according to the Ministry of Defense (MoD).

The Defense Ministry also said that the use of such weapons demonstrates that Russia is running out of more modern rockets.

The MoD did not specify where exactly these missiles were deployed, but suggests the projectiles have a range of around 600 miles (1,000 km).

The ministry said: “They were primarily designed to destroy aircraft carriers using a nuclear warhead.

“When used in a ground attack role with a conventional warhead, they are highly inaccurate and therefore can cause significant collateral damage and civilian casualties.

“Russia probably resorts to such ineffective weapon systems because it lacks more accurate modern missiles, while Ukraine’s air defenses still deter its tactical aircraft from carrying out strikes across much of the country.”

Russia has decommissioned more than 400 Cold War-era missiles before 2006 as part of a disarmament treaty.

The Ukrainian Ministry of Defense has not yet confirmed the use of such missiles against them.

The Defense Ministry has suggested that the bulk of the battle for Ukraine will continue in the eastern city of Sieverodonetsk.

The latest intelligence report suggests: “During the next few months, river crossing operations are likely to be among the most important determining factors in the course of the war.”

He continues: “The 70-mile-long key central sector of the Russian front line in the Donbass lies west of the Silverskyy Donets River.

“To succeed in the current operational phase of its Donbass offensive, Russia will either have to carry out ambitious circumvention actions or carry out assault river crossings.”

The report suggests that Ukrainian forces succeeded in destroying several bridges over the river, thus disrupting Russian advances in the area.

Ports in southern Ukraine have become a hot spot in the war as global grain supplies are affected by Russian blockades.

US Secretary of State Anthony Blinken estimated that more than 20 million tonnes of grain are now stuck in Ukrainian ports.

The issue was discussed recently at a meeting of the United Nations Security Council in which Russian Ambassador Vasily Nebenziya left the meeting following allegations of militarization of food supplies by the President of the Security Council. EU, Charles Michel.

Speaking about the current situation, Mr Blinken said: “President Putin is preventing the shipment of food and is aggressively using his propaganda machine to deflect or distort accountability because he hopes this will cause the world to give in to him. and end the sanctions.

“In other words, quite simply, it’s blackmail.

“The Kremlin must realize that it is exporting starvation and suffering far beyond Ukrainian neighborhoods, with countries in Africa bearing an inordinate share of the pain.”

In order to defend itself, Ukraine expects a delivery of long-range rockets to deter Russian advances.

A report released Friday by the Institute for War Studies said the use of artillery and long-range weapons could pave the way to victory in eastern Ukraine.

“Effective artillery will be increasingly decisive in the largely static fighting in eastern Ukraine.”