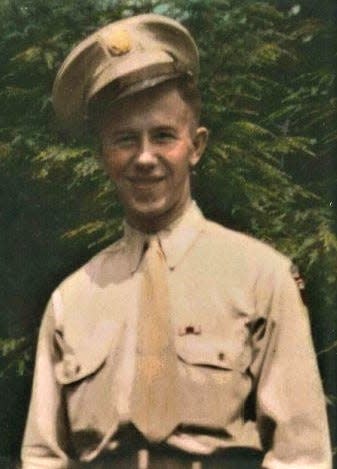 On January 22, 1944, PFC. John Perkins, who was serving in the 7th Infantry, landed at Anzio Beach with Allied forces to liberate Italy.

The Germans were surprised by the location of the invasion, but had foreseen different scenarios and acted quickly to reinforce the area. Allied forces had secured the bridgehead but were unable to break through the German lines. The beach being secure, supplies and mail were able to pass. On January 28, Perkins sent a letter to his parents in which he alluded to the terrible war he is waging:

â€œDear mom and dad. Just a few lines for you on this clear, early morning. It’s 10:05 am now, so I thought I would write you a few lines before dinner. Well, if anyone wants to know, it’s not that cool in here and I’m not talking about the weather either. But we’ll have to hold on I think. I would love to cross the hill right now but wouldn’t know where to go if I did. I couldn’t go back to the United States anyway. So I’m going to stay here with the rest of the boys, if they can take it I guess I can too. How is everyone at home, very well I hope. I’m fine, I still have my cold, but I can’t expect much to sleep on the floor. Well will close for this time, write soon. Send me 5 books. candy so I can eat a storm. Lots of love and kisses from your son.

After three weeks, the Allied forces were still trapped with the ocean at their backs. On February 14, Perkins wrote to his parents from the front lines: â€œJust a few lines in response to your letter which was written on January 1, I received it on February 1 and was very happy to have you. news as well. I don’t know much to write but a few lines will be enough so that you don’t worry about me. What do you think, at least I hope you don’t worry too much. Well I got a really nice box from my wife the other day. She had peanuts, gum, candy bars, cookies and cigarettes in them and a few tissues too. It was a very beautiful box, every drop of which I really enjoyed. I mean boys and I did. You know we are all brothers in this army. Well will close for this time, write soon. Lots of love and kisses from your son.

Neither the Germans nor the Allies were yet ready to admit defeat in Italy. In the days and weeks to come, the battle continued, with neither side gaining the upper hand.

Doug Stout is the Veterans Project Coordinator for the Licking County Library. You can contact him at 740-349-5571 or [email protected] His book “Never Forgotten: The Stories of Licking County Veterans” is available for purchase at the library or online at bookbaby.com.

The emergency operations bunker in the Highland capital houses relics from the Cold War, including a helicopter whose passengers once included Prime Minister Margaret Thatcher