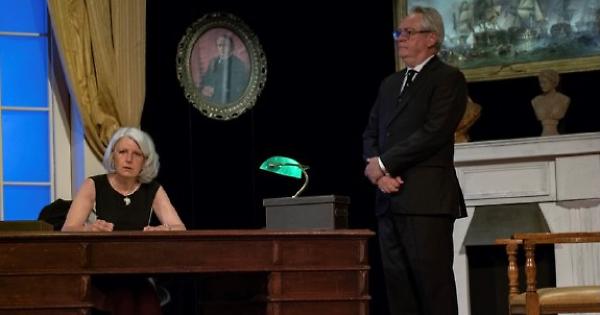 TWO plays that were due to be performed at Henley before the coronavirus pandemic have become topical since they were postponed.

Tales from Star City and The Letter of Last Resort focus on different elements of the Cold War, the period of hostility between East and West after World War II until the collapse of the Berlin Wall and the dissolution of the Soviet Union in the early 1990s.

Russia’s invasion of Ukraine prompted the creative team behind the productions to donate all profits from performances at the Kenton Theater to the War Child charity. Tales from Star City by Dan Dawes is about an idealistic young woman, Polina, played by Christina Baston, working as a radio technician in the 1960s at the start of the Space Race program in the Soviet Union.

As the risks of space travel become clearer, she faces questions about ethics and her own feelings of empathy for the need to do her job.

Dan says: “She finds herself in Russia and falls in love with the communist utopian dream, but realizes through her work that in reality this dream is perverted and corrupted by people, power and politics.

“A theater I’d worked in before had a last-minute cancellation and said, ‘Can you put a show together in three weeks?’ and I said “yes”.

“I never imagined that I would be sitting here talking about it four years later, especially when it comes to current events.

“Any drama will have issues and themes that are relevant to today and it’s our job as theater makers to make things relevant. I like to think it was already a play that had resonance but not with the same level of urgency as now.

Dan starred in The importance of being serious in Kenton 10 years ago and still in pantomime Robin Hood in 2017.

“I played a character called Guy of Gisbourne and I looked like a giant orange button,” he says.

There is a slight relief in Tales from Star City too.

“It explores the brightest and darkest elements of space,” Dan says. “There are a lot of positives there. Polina begins to listen to American radio stations and Brenda Lee and dances around the space a bit.

David Greig’s The Letter of Last Resort examines the Cold War from Britain’s side of the Iron Curtain.

A new female Prime Minister is celebrating her first night in office when an aide says one of her first tasks is to lay out some contingency plans. This raises a series of moral dilemmas for the new leader.

Lisa Day, who plays the Prime Minister, said: ‘One of her jobs is to write a letter that goes into the safe of a nuclear submarine that’s going around always ready to act in case the world would be wiped out and whether or not he retaliates, hence the letter of last resort.This is a huge request for your first night in the office.

The assistant is played by Lisa’s husband, Robert Gordon Clark, who helps the Prime Minister.

Lisa says, “Her role is to advise or guide me through the kind of ethical, moral and logistical dilemmas of whether I write ‘revenge’ or ‘don’t retaliate’, or some other option.

“I’m going through a lot of angst. Writing ‘retaliation’ is a war crime and it’s horrible, it’s a bad option, but writing ‘do not retaliate’ makes the whole thing multi-
Worthless billion pound nuclear project. It’s a bit scary – what am I doing, what am I writing, what am I not writing? »

Despite this gloom, Lisa says the piece has some ironic moments: “At one point there’s a reference to her being a bit like Yes, Prime Minister,” she says. “It’s explicitly self-referential about the absurdity of it all.”

• Tales from Star City and last resort letter, a Cold War doubleheader, is at the Kenton Theater on Sunday at 7:30 p.m. Tickets are priced on a ‘pay what you want’ basis (plus a £1.50 booking fee), with all profits going to War Child. The shows have a total duration of 135 minutes with an interval of 20 minutes. For more information and to buy tickets, call the box office on (01491) 525050 or visit www.kentontheatre.co.uk