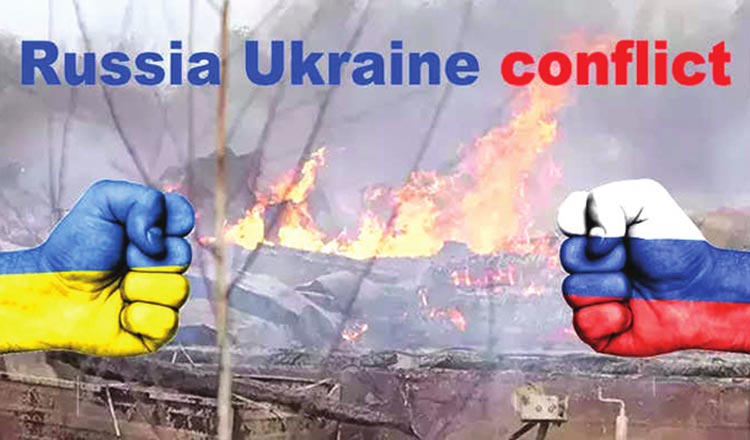 Russia and NATO have not gotten along since Ukraine applied for NATO membership. This led to an escalation of tensions between the two countries and on February 24, Russian troops began to attack Ukraine and worried the world about a possible outbreak of World War III.

So far, the impact of this crisis has had negative effects on people caught in conflict areas, including the loss of innocent lives, their homes and their families. Infrastructure was destroyed. Everything is ruined. Ukrainians are desperate, displaced and have become refugees fleeing their hometown.

Why is this calamity happening? Why is Putin deciding to invade Ukraine, ignoring the threat of Western sanctions, including the United States?

The tension between Russia and Ukraine

Russia was formerly called the Union of Soviet Socialist Republics (USSR), which was formed in 1922 and collapsed at the end of 1991. They have been replaced by 15 independent nations, including Russia, Ukraine , Belarus, Georgia, Moldova, Armenia, Estonia and Latvia. , Lithuania, Azerbaijan, Kazakhstan, Uzbekistan, Kyrgyzstan and Turkmenistan.

After Ukraine declared its independence following the collapse of the Soviet Union on December 5, 1994, Ukraine and Russia signed a Budapest Memorandum on Security Guarantees with three other signatories: Russia , the United States and England. Through this memorandum, Ukraine agreed to give up nuclear weapons inherited from the Soviet era and transfer them to Russia in exchange for the commitment of Russia, the United States and Great Britain to respect the sovereignty and territorial integrity of Ukraine.

Since Ukraine declared its independence from the Soviet Union in 1991, the two countries have never had a conflict with each other. Until 2008, Ukraine, together with Georgia, applied for membership in the North Atlantic Treaty Organization (NATO) at the April 2008 summit in Bucharest, Romania and NATO welcomed the desire of Ukraine and Georgia to be members. Faced with strong opposition from Russia, France and Germany, NATO refused to launch a membership action plan to accept Ukraine and Georgia as members, but did not. not closed and also allowed Ukraine to join later.

Following Ukraine’s application for NATO membership, tensions between Russia and Ukraine escalated day by day and until December 2021, Russia deployed more troops near the border Ukrainian; Western countries said he was aiming to invade Ukraine, but Vladimir Putin denied it. He said Russia had no intention of invading Ukraine. But at the same time, he imposed certain conditions on the United States and its NATO allies, including demanding that NATO guarantee that Ukraine would not join and that NATO withdraw all military forces stationed in the Eastern European country, which joined NATO after 1997.

Joe Biden, President of the United States, warned that if Russia invaded Ukraine, the United States and its allies would impose the toughest sanctions on Russia, but at the same time the President also announced that the States The United States would not send troops to help Ukraine, because this country is not a member of NATO. From December 2021 to February 2022, a number of diplomatic efforts were made to avert war in Ukraine.

These diplomatic efforts had not yielded positive results. Biden and his NATO allies have refused to change their “open door policy,” leaving it to each country to decide whether or not to join NATO.

After Putin recognized Donetsk and Luhansk as independent states on February 21, on February 24 Russian troops began to attack Ukraine.

Ukraine’s potential NATO membership has been at the center of the war with Russia. Vladimir Putin has vehemently opposed Ukraine’s joining the Western alliance, seeing it as a threat to Russia’s borders.

Although Ukraine enjoys the support of all 30 NATO members against the Russian invasion, it faces obstacles in becoming a member.

In the past, NATO is a legacy left by the Cold War after the end of World War II and exists until today. It was formed on April 4, 1949 and came into effect in 1951.

The fact that NATO continues to expand closer to Russian territory worries Russia even more. This is something Putin cannot accept, he said, it is a security threat to Russia. Allowing Ukraine to become a member of NATO would be a major danger for Russia.

Since the end of Cold War II, Western countries have promised but failed to deliver, which has made Putin hard to accept. For example, in February 1990, Soviet President Mikhail Gorbachev met with US Secretary of State James Baker to discuss the withdrawal of Soviet troops from East Germany. To reassure President Gorbachev of future geopolitical consequences, US Secretary of State James Baker said: “Don’t move an inch east, NATO won’t move an inch Is after German reunification. The Chancellor of the Federal Republic of Germany, Helmut Kohl, also claimed that “NATO would not normally expand to East Germany”. In 1991, when Soviet Defense Minister Dmitry Yazov spoke about NATO membership in Eastern Europe, the British Prime Minister said, “It’s not possible.”

This proves that this is the only way to reaffirm Russia’s commitment to NATO and Western countries that Russia does not trust what has been promised to them. Russia therefore does not allow the threat of NATO on its borders.

In the world, no one wants war, because it destroys everything. The Russian-Ukrainian crisis has become a war between the European Union and Russia, which from the beginning was between two countries: Russia and Ukraine. Indeed, countries in Europe and some countries in Asia have promised to send people, soldiers, to provide military assistance, weapons, as well as fighter pilots to help Ukraine.

Ukraine and Russia should resume negotiations to seek a solution to end the war as soon as possible. If the first, second and third rounds of negotiations between the two delegations of Kiev and Moscow have not yet yielded the expected results, they should continue to discuss until a solution is found.

Uch Leang is Deputy Director of Asian, African and Middle Eastern Studies at the Institute of International Relations at the Royal Academy of Cambodia.

How to Prevent World War III