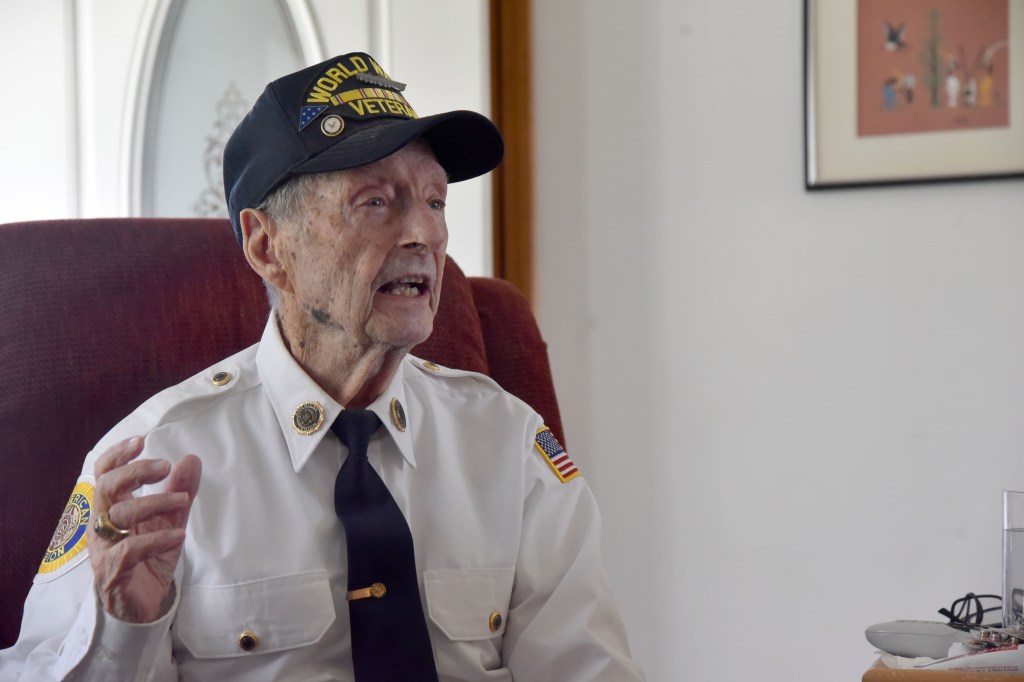 MILTON, NY – Jerome Greco, 95, served in both World War II and the Korean War before a 30-year career with air conditioning and refrigeration giant Carrier that took him through the world.

Standing in the living room of his home nestled in the woods on a busy stretch of U.S. Highway 9W, Greco recalled how he volunteered to serve his country in 1942 shortly after the States entered the war. States after the Japanese bombing of Pearl Harbor in December. 1941.

Greco was a 15-year-old living in Garfield, NJ at the time. A midwife who was a good friend gave him baptismal papers for the church which stated that he had the minimum age of 17 to serve.

“I was so patriotic,” Greco said. “My mother died when I was young, so I was almost like a delinquent.”

Greco went to New York, planning to be a Marine, but he was just too small and skinny to make the cut, so he was sent to the Marines. Soon after, he went to Newport, RI, for about a month before being sent to a naval air base in Florida where we trained to serve on a bomber.

But Greco, who had to sit upside down on the plane, had a big problem: He got sick every time the pilots started a dive. This prompted Greco to ask his superiors if they would let him serve aboard a ship.

His request was granted, and he set sail for Morocco on a Liberty ship, a converted freighter with hundreds of soldiers and two cannons. Just sailing across the Atlantic was very risky with an ocean full of packs of German submarines, or U-boats, he said.

Greco arrived in June 1942. The objectives of the American troops were to help the Allies and local troops rid North Africa and the Mediterranean of German troops. Once this was accomplished, the next objective would be to invade Italy, one of Nazi Germany’s Axis partners.

The Allies were in bad shape at the time. Adolf Hitler’s armies controlled most of Europe, having conquered Poland, Norway, Belgium and France, Greco said.

He admitted that some of his fellow sailors had interviewed an Italian-American fighting Italy. His response: “I am an American, a patriotic American,” he said.

He said he spent a lot of time in Tunisia, which was the closest country to Italy, and a good place to launch troop landing operations on the beaches of Anzio, which offered the best route to the capital. Italian from Rome.

During this part of the operation, Greco served as coxswain, directing wooden landing craft that would be dropped by the larger naval cruisers to land 20 to 25 American soldiers and troops from Africa on the beach. Sometimes these boats, made famous by the D-Day invasion of Normandy on June 6, 1944, also carried a Jeep, he said.

It was a delicate operation, recalls Greco. He said he had to be careful to open the metal door at one end of the craft at the right time to prevent troops armed with M16 rifles and a heavy bag from sinking below the surface of the water. and don’t drown. He added that he tries to track every seventh wave, usually the biggest when he lands.

All the while, he had to dodge enemy machine gun fire as shells aimed at the beach passed overhead and enemy cannons on the beach and on his ship blew up. Sometimes he had to bring wounded soldiers to a special gate next to the larger ship so that they could be brought aboard for treatment.

As for how he got through the war, Greco said he prayed a lot and he said he was not afraid to die. After two years he was sent home, only to be sent to Brazil to serve aboard a fast wooden patrol torpedo boat, or PT boat, to help deal with the constant problem of German U-boats continuing to attack navigation.

“We lost many ships there,” he said.

The Germans were interested in South America because Argentina was not going to war and offered the Germans a place to get fuel in the Americas.

The submarines came very close to the United States, with one even landing on Long Island on one occasion after the crew ran out of food supplies, Greco recalls. The story goes that some local residents ended up feeding them, he added.

Greco said the Germans had a seemingly inexhaustible supply of U-boats during the war, noting that the Americans sank 750. The PT boat’s mission was to drop a load inside a shaped enclosure of a tin can, known as a depth charge, in the water above a submarine. When the depth charge exploded, it produced a hydraulic shock that could destroy a submarine or force it to surface and surrender.

Greco’s life would change forever when he met his late wife, Maria Aparecida Burgos, known to the family as “Cida”, at a USO event in Brazil. They would remain married for 70 years until she died at 88.

Greco was later honorably released. He and Cida went to the United States for a while while he finished his high school diploma in the evenings. After the outbreak of the Korean War in 1950, Greco volunteered to serve even though he had two children at the time.

He said he served in Greenland on a similar ship and commanded a landing craft similar to those he operated in World War II. These ships helped build the Distant Early Warning Line, or DEW Line, a system of radar stations set up to warn the United States if bombers arriving from the Soviet Union armed with nuclear weapons were detected. Greco’s job once required him to climb a mast in -40 degree temperatures in waters full of icebergs.

Later in the Korean War, he served aboard a ship tasked with bringing troops from an American base in Japan towards the end of the conflict in 1953 which saw Korea divided into North Korea and South Korea. South.

He then followed a global career with Carrier which began in Brazil and then took him to North Africa at a time of great change as colonial territories ceded to independent nations. This sometimes meant a bit of danger for Greco and his family as he got closer to fighting, especially in the Belgian Congo, where he had to flee to the still-French Congo when soldiers seeking independence entered the city ​​where he was. work.

Greco even worked on heating, ventilation and air conditioning projects in Russian embassies during the height of the Cold War. He was in Havana for a job. Fidel Castro took control of this country in 1959 when his revolution overthrew the government of Fulgencio Batista.

His work at Carrier then took him to Puerto Rico for a time before ending his career in a management position in Italy overseeing 300 employees.

Near the end of a two-hour interview, Greco delivered a message of caution to US policymakers in 2022 regarding the Russian invasion of Ukraine. “Russia has atomic bombs and it is not afraid to use them,” he said.