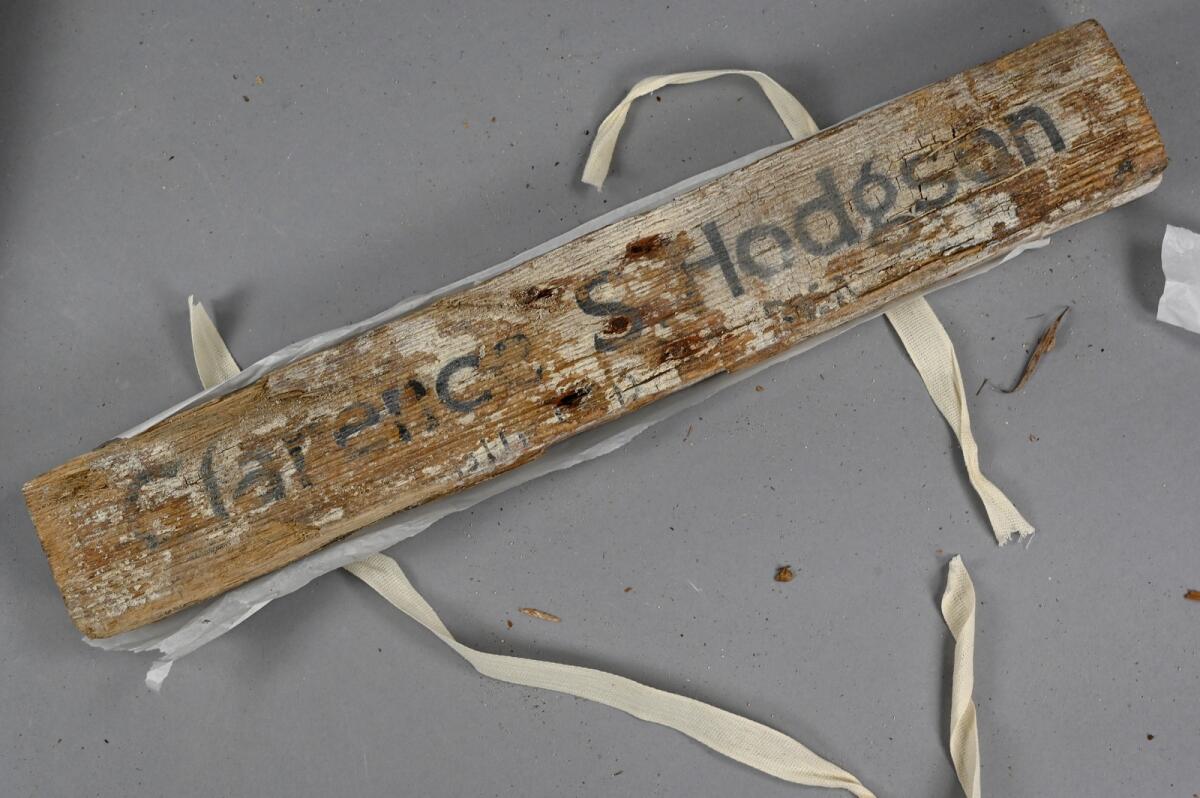 Part of a wooden cross bearing the name and service number of Marine Clarence Hodgson of Eddyville was recently donated to the National Museum of the Marine Corps. (Katherine Frey / Washington Post)

QUANTICO, Virginia – Curator Owen L. Conner carefully unties the tape around the weathered slats and removes the storage paper. The sand on the island where the Marines fought still clings to some of the wood. One by one, he assembles three crosses formerly used to mark graves.

As he does, faded names appear black on chipped white paint: Robert W. Hillard; Clarence S. Hodgson; Bernard A. Marbre. Fragments of other names can be seen on other coins, and “Nov… 1943.”

The crosses come from cemeteries lost on the battlefield of Tarawa during World War II, a Pacific atoll where more than 1,000 Marines were killed fighting the Japanese, and where hundreds can still be buried in unmarked graves.

Last month, the National Museum of the Marine Corps officially acquired the crosses, along with other funeral artifacts, from History Flight Inc., the nonprofit archaeological society of Fredericksburg, Va., Which is excavating Tarawa for over a decade.

Tarawa crosses are rare and are considered the only such artifacts in a museum collection. Among Tarawa’s objects: A projectile extracted from the lower back of a skeleton; an ampoule of virgin iodine glass; a small glass bottle containing unidentified pills; a surgical thread container; a deteriorated poncho like the bodies were buried; and Japanese and American helmets and canteens.

A helmet used in the Battle of Tarawa in 1943 is associated with an unused version at the National Museum of the Marine Corps. (Katherine Frey / Washington Post)

The crosses had been wrapped up like a bundle of old fence pieces and stored in a depot on the atoll when they were spotted three years ago by History Flight operations director Justin D. LeHew.

One day last week, Conner, the museum’s curator of uniforms and heraldry, unpacked the crosses and other artifacts in the museum’s support center in the former marine base brig here. He said he hoped some of them might be on display at the museum soon.

The crosses all told tragic stories.

The United States attacked the Japanese atoll – mainly its small island of Betio – for four days in late November 1943. The attack was part of the plan, after the Japanese bombardment of Pearl Harbor in 1941, to capture enemy strongholds across the Pacific. Ocean.

But Betio, codenamed “Helen”, was heavily fortified, defended by about 4,500 men. A Japanese admiral is said to have boasted that a million Americans could not stand it in 100 years. The Marines had about 18,000 men.

The battle was fierce and often fought up close.

Color footage shot by a Navy cameraman captured the grim nature of combat and its aftermath. In one clip, the bodies of the Marines are strewn across the beach and floating in the water. The treatment of the dead was haphazard.

“Corpses were everywhere”, Pfc. Joe Jordan recalled, according to historian Derrick Wright. “We worked to identify the members of our unit and put them in the trench covered with their ponchos… Then the bulldozers pushed sand over the bodies.”

According to the Defense POW / MIA Accounting Agency, graves were scattered across the island, some apparently marked with markers, others not.

Military construction projects then moved many headstones without moving the remains, an agency historian wrote.

In addition, other markers appear to have been placed where there was no body. And some markers were erected to commemorate the Marines who died of their wounds and were buried at sea.

In 1946, grave-recording experts unearthed the remains of 43 cemeteries and burial sites across the island and combined them into one. In late 1946 and early 1947, the combined remains were exhumed again and the markers apparently discarded.

The human remains, at this stage mostly skeletal, were taken to Hawaii for possible identification, and in 1949 those unidentified were reburied in a national cemetery in Honolulu. In the whole process, however, half of the dead sailors could have been left on Betio, according to the accounting agency.

Last week, Hillard, Hodgson and Marble’s crosses looked like pieces of driftwood when Conner, the curator, put them together on a display table.

He matched the name, rank and serial numbers written on the broken sections as if he was working on a puzzle. While working, he said he often wondered about men.

“What’s really tragic about these men (is) that a lot of their stories have been lost,” he said. “Because they didn’t have… their own young families and their parents were the only people they had, and they left.”

“You kind of have these dead ends in their life,” he said. “When I see these crosses, I think how sad their end is.”

A photograph of Marine Clarence Hodgson of Iowa is displayed on a computer screen at the National Museum of the Marine Corps. (Katherine Frey / Washington Post)

Clarence Stanley Hodgson, of Eddyville in Southeast Iowa, had just turned 18 when he enlisted in the Marines in 1940. He was known as Stanley and was the son of a farmer. He was 21 when he was shot in both legs on November 21, 1943.

He was evacuated to the USS Sheridan, an personnel carrier, where medics amputated part of his right leg. He was given whole blood, blood plasma and dextrose saline solution.

But he “did not respond to treatment,” according to government records. He died at 9 p.m. the next day and was quickly buried at sea.

He was awarded a commemorative cross on Betio despite the absence of his body.

Robert W. Hillard, originally from West Tulsa, was one of 11 children and stepchildren in a blended farm family in Big Fork, Ark., According to census records.

He was 17, a technically minor, when he enlisted in 1941. He needed his mother’s consent to enroll. He was 19 when he was shot in the head and killed on November 20, 1943, according to government records collected by private researcher Geoffrey Roecker.

Hillard was one of 61 Marines in his company of 165 men killed in the battle, Roecker said in an email. They were shot as they tried to land on a particularly deadly section of beach known as “the pocket”.

His family was not informed of his death until January 1, 1944. And his body was not found.

But after the war, his mother, Susie Ratliff, said the Marines sent him a package of his personal effects – a cigarette case, a pocket watch and a wallet, and mistakenly informed her that he was buried in “tomb 9, row 1, plot 10” of a marine cemetery on Betio.

In 1947, the Corps overturned, apologizing and telling him that he had not found his son’s body under his gravestone – the same, perhaps, that Conner now had on his table. exposure.

“Presumably… the cross was erected in his honored memory rather than… as a marker identifying the location of his grave,” the Marine Corps commander wrote to him.

“Why was I deceived? she wrote to a local congressman. “Why didn’t they tell me the hard and cold facts at first so I could get used to all of them at the same time?… (This is) more than I can reasonably take.”

Sgt. Bernard A. Marble was 28 when he was killed on November 21, 1943. His battalion had suffered heavy losses when it landed on Red Beach 3 the day before.

A native of Somerset, Mass., He enlisted on September 19, 1941, according to records. His body was recovered and buried in a large grave on Betio. He was then exhumed and reburied in the Combined Tomb. He has been identified. Its location was recorded and a grave cross was created.

It is not known what happened after this, but when his remains were once again exhumed and moved to Hawaii, they were classified as unknown. At this point, they mainly consisted of a skull, arms, chest and pelvis, according to government records.

Laboratory examination of his dental records and physical characteristics, however, allowed experts to identify the body as Marble’s.

He was returned to Somerset and on May 12, 1949, five years after his death, he was buried in a cemetery on the corner of his house. The funeral flag was presented to his mother.

About 140 sets of remains on Tawawa have been recovered and identified. Up to 400 may still be there.