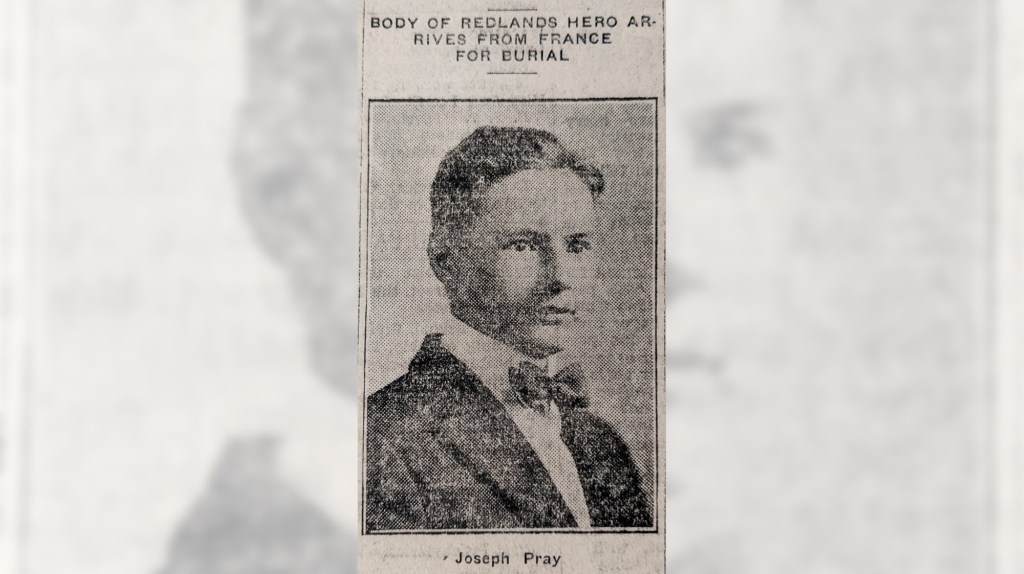 Final honors for well-known Redlands boy Joe Pray, son of Mrs CS Lombard, who was killed in France, will be paid by the community tomorrow, his body arriving yesterday on his long journey from Sierges Cemetery in France , and was greeted by a detail of American Legion men from Redlands.

The funeral will be in charge of Redlands Post of the Legion, which will meet tomorrow at 2 p.m. at Dow & Fitzsimmons Chapel to conduct the body to Trinity Episcopal Church, where services will be held at 2:30 p.m., Reverend Ralph P. Smith officiating. The church choir prepared special music for the occasion, as Pray at one time was an altar boy there.

Many of the men who served with Pray in Company E, 117th Engineers, will come from Los Angeles to pay their respects to their dear comrade. They bring with them their old regimental colors for the funeral.

Pray enlisted in the 117th Engineers in July 1917, along with Wilson Spoor, Verne Gay, Fred Clock and other men from that section. The organization was concentrated at Camp Mills in September 1917, became part of the 42nd (Rainbow) Division, going overseas almost immediately.

Pray was killed in the campaign following the American successes at Château-Thierry. He had graduated from Redlands High School with the Class of 1914, a popular student there, and was employed in the city engineer’s office.

The Redlands High School Marching Band will accompany the body at the funeral march.

It was still quite cold last night

Temperatures across Redlands were two or three degrees higher last night than the night before. The thermometer also showed that off-peak periods were much shorter. Nothing is believed to have added to the damage from the previous night. In the lower parts where the winegrowers were equipped to heat, ideal conditions prevailed. Last night’s cold would have damaged only the most exposed groves, which had received all possible damage the night before.

Interestingly, Mr. Ellison, the local Weather Bureau representative, says the temperature reached at his station at the Nevada Street Packing Station on Thursday evening was 19.8. It’s also worth noting that its two stations at Riverside showed lows of 22 and 24, although that district’s official report was 31.

ES Ellison, Head of the Government’s Frost Investigation Service, made his forecast of overnight conditions at 7.30am last night and immediate preparations have been made in all districts where heaters are being used as protection against the gel to start shooting early in the evening. The pots were lit before midnight and in most groves the temperature was maintained at 26 or more overnight despite the fact that a low temperature of 23 was recorded where no heating was carried out.

The mass meeting took no action

Growers and packers of oranges from the Redlands and Highlands gathered in a mass meeting this afternoon at Town Hall to consider the proposal to hold back all shipments of oranges until the extent of the frost damage is determined. There were nearly 75 people present. It was decided not to take any action of any kind. …

EM Lyon spoke about the situation, suggesting that without knowledge of what the state is going to do, local action would be ineffective. He said shipping at such a time was largely an individual matter, anyway, as there are growers who will find a packing station to ship their fruit to.

The funeral of Joseph Pray, son of Mrs. CS Lombard, of La Terrasse, who was killed in the operations following the American successes at Château Thierry, took place at the Episcopal Church of the Trinity yesterday afternoon, a large number of friends and former members of his Company E, 117th Engineers, Rainbow Division, being present.

There were 20 of the company’s former members, who came from Los Angeles for the funeral. One of them brought with him and offered to Madame Lombard the mirror which hung over Pray’s bed in all his campaigns in France.

Reverend Ralph P. Smith delivered a brief eulogy and spoke of the boy’s service to his country and to humanity. The music was particularly good, arranged by Harl McDonald in honor of the brave boy, who was once a member of the Trinity Church choir.

These men and the American Legion were in charge of the services that were held at the tomb. The boy was taken to church on the caisson and limber drawn by four white horses. The high school orchestra played the dirge.