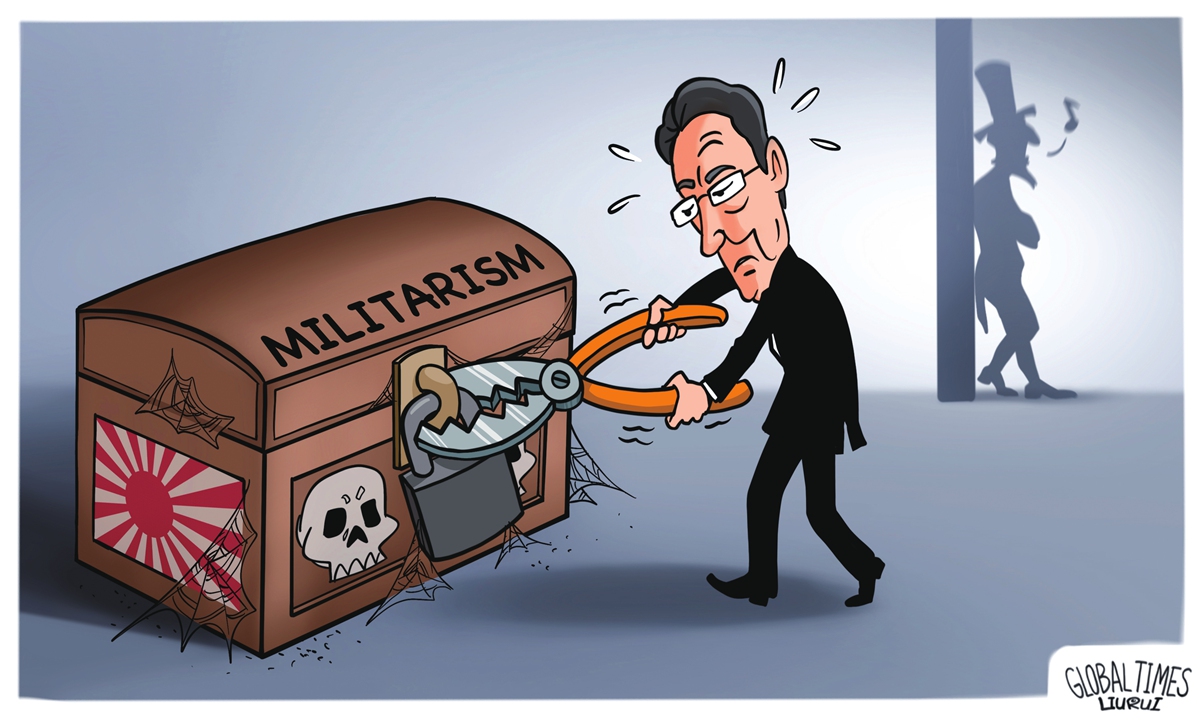 Be careful what you wish for. Artwork: Liu Rui/GT

Japan’s ruling Liberal Democratic Party (LDP) won a landslide victory in Sunday’s House of Councilors elections, winning more than half of the seats up for grabs. The LDP’s coalition partner Komeito won 13 seats. Their victory means that political forces, especially the LDP, which favors revising Japan’s pacifist constitution, retain a two-thirds majority in the upper house, crossing the ‘threshold’ needed to launch a motion to change the constitution. .

Japanese Prime Minister Fumio Kishida will not pass up the opportunity as constitutional revisionists dominate the upper house. Right-wing tendencies will increase, a constitutional amendment will certainly go forward.

Given the changing security landscape around Japan, the election result is seen as an opportunity for Japan to shed the restrictions imposed by the post-war pacifist constitution so that Japan can rearm and become a “normal country” with an independent army and the permanent power to send troops abroad. It’s a long-term goal set by former Prime Minister Shinzo Abe, who was assassinated on July 8.

Of course, the possibility of revising the constitution will depend on public opinion in Japan, which is strongly influenced by the evolution of the security environment on this issue. It will also depend on whether the United States accepts a rearmed Japan in its strategic reorientation towards China.

The United States played an important role in the rearmament of West Germany in the 1950s. The aim was, of course, to consolidate its leadership over the Western bloc, including keeping Germany from the West in the bloc while preventing it from re-Nazifying, to counter the Soviet Union.

France, which had been invaded by Germany several times in the last 100 years of its history, strongly opposed the rearmament of West Germany. At the time, West German Chancellor Konrad Adenauer told French leaders that the threat came not from rearmament in West Germany, but from further east.

A caricature drawn by the German cartoonist Brockmann in January 1955, with the caption “The enemy is in the East. And what will happen, dear Pierre, when I am no longer there to separate them” ironically distrust of the President of the French Council of Ministers at the time, Pierre Mendès, concerning the rearmament of West Germany.

In October 1954, the United States, United Kingdom and France negotiated and signed the Paris Agreement with West Germany, legally ending the occupation of West Germany and recognizing the Federal Republic of Germany as a sovereign state.

The Paris Agreement was the starting point for West Germany’s reintegration into Western society and removed diplomatic and political obstacles for West Germany to rebuild its military.

Allied forces stationed in West Germany gradually shifted their focus from their original mission of preventing the resurgence of German militarism to another mission of assisting in the defense of West Germany and Europe. western. West Germany became a member of NATO and a unified Germany naturally became the backbone of the NATO bloc after 1990.

With the Russian-Ukrainian conflict, the security landscape in Europe has once again changed considerably. Germany has launched a plan to increase defense spending. Chancellor Olaf Scholz said on June 7 that Germany would increase military investment to strengthen the protection of NATO’s eastern flank, allocate a “special fund” for the modernization of the armed forces and strengthen NATO’s military forces. to make Germany “the strongest armed forces in the world”. Europe and one of the strongest in NATO.”

Likewise, the changing security landscape in East Asia is used by Japanese politicians as a reason to rearm Japan, and public opinion is deeply influenced by it.

The PLD’s Security Research Commission also recommended that Japan increase its military spending to 2% of its GDP within five years, citing increased military capabilities of neighboring countries as a “major threat” to Japan. . Kishida recently said the Japanese government has no intention of discussing a “nuclear sharing” policy under which US nuclear weapons would be deployed on Japanese territory for joint use. But there is no problem for the LDP and other parties or the Japanese to discuss the issue.

A scene that happened in Europe seems to be repeated in East Asia. This time, the “enemy” is seen as coming from the West.

But there is a fundamental difference in East Asia between the Cold War era and today. The three major economies – China, Japan and South Korea – are in a state of deep integration in terms of economic, trade and civil relations.

Despite the intense competition between the three countries in terms of technology and markets, none of them is willing to completely sever these connections.

Therefore, the future direction of the regional security situation, especially the direction of the US decoupling strategy towards China, will have a strong impact on this nexus. If the three countries fail to make sustained progress in economic, trade and civil engagement, the wedge pushed by the United States will continue to widen the gap.

Thus, Japan’s rearmament and overhaul of its pacifist constitution is both a Japanese issue and a broader regional security issue, depending on how Japan responds to the US “Indo-Pacific strategy” and the rise of China. Whether Japan can rearm is Japan’s business, but if that rearmament is directed against China, it is bound to be a dangerous decision.

China doesn’t have to sit idly by on this issue, and China has many options to choose from in response.

The author is an editor of People’s Daily and currently a senior researcher at the Chongyang Institute of Financial Studies at Renmin University of China. [email protected] Follow him on Twitter @dinggangchina

20 Best World War I Movies Of All Time, Ranked