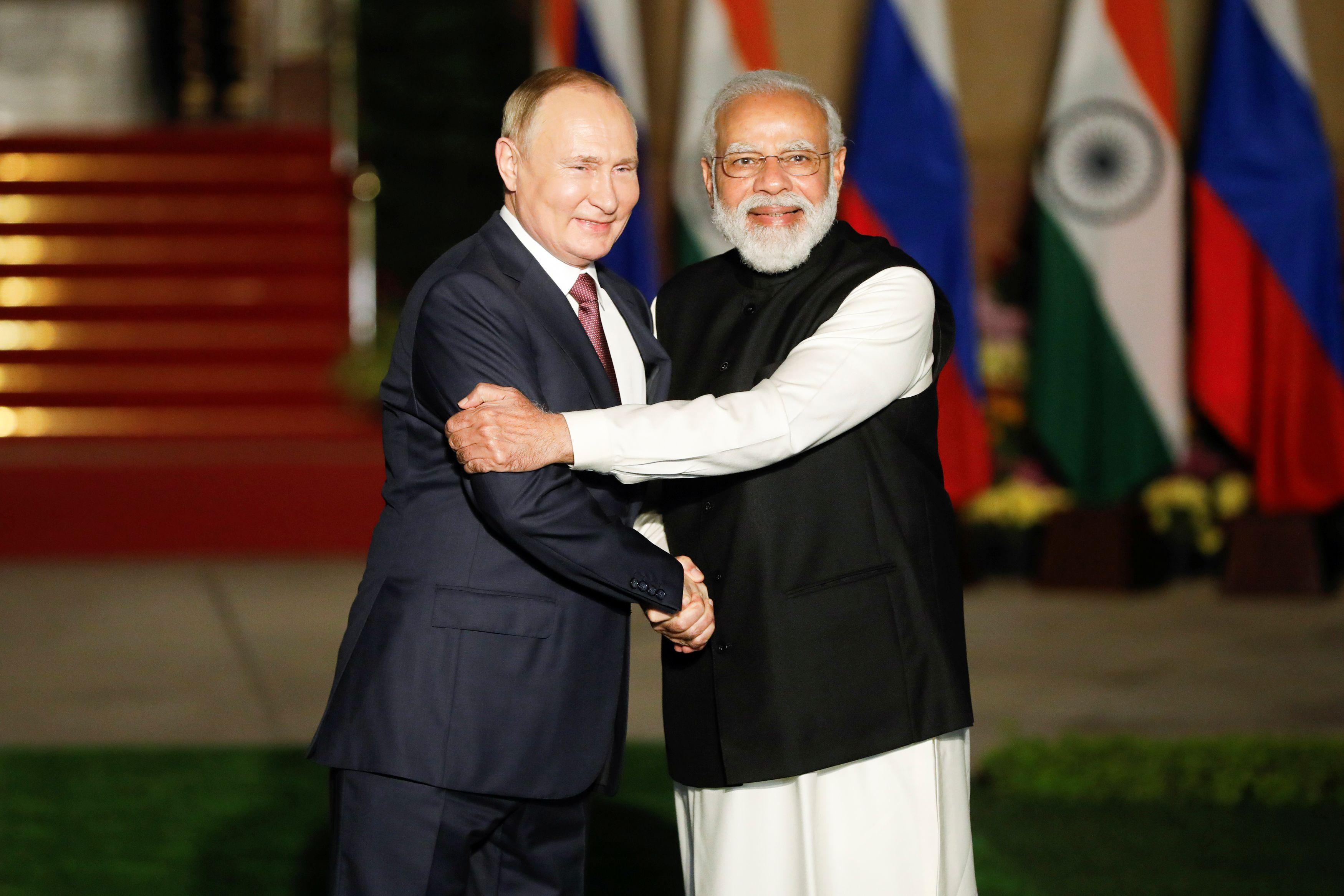 Similar to Cold War-I, New Cold War-II seems to be dividing the world again, but the situation is much more complex. Cold War-I was led by the USSR, but China with a much larger economy should be the natural leader of the new anti-Western bloc

It is to the credit of Indian policy makers that regardless of having different ideologies, representing right or left perspective, they are in unison that the country should play an active role in current geopolitics, when the world will emerge from the era of the unipolar world under the spell of the USA as the only superpower in the game of multiple powers, notably China and Russia. Within India, the country’s role as a non-aligned nation has also always come under scrutiny. During the post-emergency years, that is to say from 1977, the then Foreign Minister, Atal Bihari Vajpayee, had enunciated the doctrine of equidistance between the United States and the USSR. The situation, however, underwent a paradigm shift following the collapse of the USSR in the 1990s, when on December 25, 1991, the Soviet hammer and sickle flag was lowered for the last time over the Kremlin, replacing it by the Russian tricolor.

The Charter of Paris

The final end of the communist regime was followed by the resignation of the president of the USSR, Mikhail Gorbachev. He was replaced by Boris Yeltsin as president of the newly independent Russian state. Previously, the Summit of Heads of State or Government held in Paris from 19 to 21 November 1990 had adopted the Charter of Paris for a new Europe. He welcomes the end of an “era of confrontation and division” and proclaims the will to “build, consolidate and strengthen democracy as the only system of government”.

For its part, the Russian Federation, the successor state of the USSR, dismantled the Warsaw Pact, which had been established as a counterweight to the North Atlantic Treaty Organization (NATO), established by the hawks in the White House in 1949. A pact was formed six years later including the USSR, its affiliated communist nations in Eastern Europe in 1955.

European powers enjoyed unprecedented peace during this period, particularly as the two former Cold War enemies, America and Russia, embarked on a process of disarmament. The negotiations led to the signing of agreements for the progressive reduction of the number of conventional and nuclear weapons on European soil. Relations between them had begun to normalize, but the United States refused NATO membership to the Russian Federation. A number of former members of the Warsaw Pact have, however, been conscripted into NATO.

The Visegrad Group comprising four Central European countries, the Czech Republic, Hungary, Poland and Slovakia decided on December 21, 1991 that their objective was to become a member of NATO. They worried about the stability of their borders due to the resurgence of nationalism in Central Europe. They also feared a possible resurgence of Russian assertiveness. Initially, the new Russian rulers expected their country to be allowed to be part of Europe, but this was denied by successive US administrations. Meanwhile, the induction of a number of former communist bloc members into NATO had alarmed Russian leaders. They felt that the Western powers led by the United States were keen to weaken Russia’s traditional pre-eminent position in the region.

The Genesis of the Cold War-II

It is said that the Second Cold War did not suddenly appear on the world stage.

Almost a quarter of a century ago, in May 1998, Gorge Kennan, a former diplomat and historian, predicted that the US Senate’s decision to expand NATO to Poland, Hungary and the Czech Republic would be “the beginning of a new cold war”. “, and further stated that “the Russians will gradually react quite negatively and this will affect their policy”. The veteran diplomat is also known as one of the leading figures in the group of foreign policy alumni known as the name of “The Wise Men.” He died seven years after making this prophecy on March 17, 2005, at the ripe old age of 101.

It can be recalled that he led the campaign to contain the USSR, which eventually led to the establishment of power blocs during the years of the First Cold War. In his series of articles, including “The Sources of Soviet Conduct,” vindicated President Truman’s anti-Soviet policy. In the following years, however, he began to criticize the “anti-USSR” policies, which he had previously championed.

The Cold War II prediction was also made in Edward Lucas’ book, “The New Cold War: How the Kremlin Threatens Both Russia and the West” in 2008.

With the collapse of the USSR, there was no longer an overall military threat in Europe. Local or regional conflicts might have arisen, but they could be resolved peacefully by focusing on economic, social and political issues. There is a common perception that the Western powers led by the United States deliberately pushed Russia into invading Ukraine, and thus bleeding its economy by engaging it in a protracted war. One wonders whether the United States, as the successor to British imperial power, served the cause of peace by invoking past animosity between British rulers and the Russian emperor, the Tsar.

The Great Game was a political and diplomatic confrontation that existed for most of the 19th century and the beginning of the 20e century between the British Empire and the Russian Empire. It had had an impact on the politics of Afghanistan, the vast lands of Central Asia and having direct consequences in Iran, India and Tibet. The British feared a Russian invasion of India following its growing assertiveness in Central Asia, the Russians apprehended the expansion of British interests in Central Asia.

It is widely believed that Western powers engaged Russia in various diplomatic initiatives, but did not allow full participation in European politics. The much-vaunted initiative of the United States and Germany for a North Atlantic Cooperation Council has not been able to move things forward in ensuring a participatory role for Russia in Europe commensurate with its size and position in the region. These efforts culminated in the Founding Act on Mutual Relations, Cooperation and Security between NATO and the Russian Federation. It was signed, creating the NATO-Russia Permanent Joint Council, but it could not prevent the eight-year-old Russian-Ukrainian conflict in the region. The ongoing war in Ukraine has now entered its eighth month, but no serious peace efforts are being made to end this conflict.

In the years since 1947, India had adopted a non-aligned approach in its relations with the former colonial powers. These powers had jointly defeated Hitler’s Germany with the help of the USSR. However, the collapse of the pro-Western government in Beijing led to the formation of the anti-Communist or anti-Soviet bloc around the world. It harmed the peace in the years following World War II. The Vietnam War, the conflicts in Africa and Latin America symbolized the new rivalry for power on earth. These conflicts had led to Cold War-I. However, it ended after the end of communist rule in the USSR in 1991.

Previously, during the period following the collapse of the USSR, India had engaged in close economic cooperation with the Western world. She, however, did not try to join a Western defense alliance, but continued to obtain Russia’s advanced sensitive weapons. It is stated that the current impasse between the United States and Russia could have been avoided had US President Joe Biden reassured Russian President Vladimir Putin during their summit meeting held on June 16, 2021, in Geneva, Switzerland, that he had no intention of diluting Russian influence in the region. Six months later, Putin is rushing to New Delhi in December 2021 to ask India to join as a key partner with China in the proposed strategic alliance, Russia, India and China (RIC) for peace In the region. The proposal, however, failed due to China’s reluctance to withdraw its troops to the Indo-Tibetan borders, notably in the Galwan Valley.

Similar to Cold War-I, New Cold War-II seems to be dividing the world again, but the situation is much more complex. Cold War-I was led by the USSR, but China with a much larger economy should be the natural leader of the new anti-Western bloc. There can be no straight dividing line in the contemporary world, when American companies use cheap, highly skilled Chinese labor to manufacture their products and market them around the world. Amidst this complex and troubled situation, India is quietly pursuing its non-aligned role for the benefit of its economy as well as in geostrategic politics, especially when uncertainty has engulfed the world.