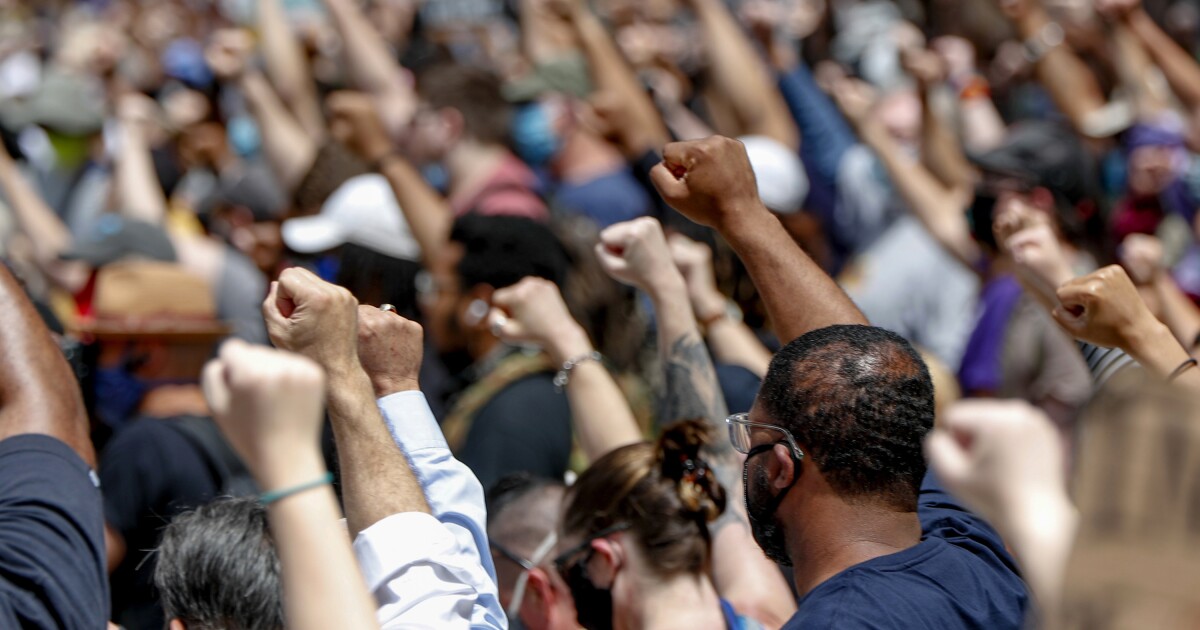 How to be an effective ally in the fight against racism

Over the past few weeks, many black people have noticed that their phones light up a little brighter.

White friends, colleagues and acquaintances check in after George Floyd’s death. And often the question “how are you” is followed by another: “how can I help you? “

“One of the first things that came to my mind was #ThisTimeItsWhitePeoplesWork,” said Jimmer Bolden, a black member of the Unity Center, who has helped lead dialogues with white worshipers who want to be allies in the fight against racism.

“It has always been the job of blacks to help black people move forward and overcome racism,” he said.

Floyd’s death below the knee of a white police officer, filmed in full view of the world, sparked historic nationwide protests that heightened awareness not only of police violence but of persistent systemic racism.

“This video brought to America exactly what black people have been saying for so long,” said Lisa McClendon, a Scripps Ranch resident, who is black.

A CNN / SRRS poll conducted this month indicates that more whites are listening.

Sixty percent of non-Hispanic whites surveyed rated racism as a big problem and 27 percent as a bit of a problem. This is a change from CNN / Kaiser Family Foundation polls which suggested white people were less troubled by racism in 2011 and 2015, and then viewed it as a problem rather than a big deal.

“It’s different this time,” Bolden said of the current wave of activism. “The biggest thing that encourages me is the diversity of voices that are expressed. “

How do you become an effective anti-racist ally?

Blacks and whites who work in this area have some suggestions.

Reverend Wendy Craig-Purcell, who launched Groups of White Allies at Unity Center, a congregation of diverse faiths in Miramar, challenges whites to listen to the experiences of people of color.

These should be personal conversations, as much as possible, not with strangers or marginal acquaintances, but with blacks with whom there is some relationship. It can still be awkward at first.

Craig-Purcell recommends a humble approach: “It can be very disarming to say, ‘I’m going to take a risk here. I am outraged by what I see, I realize that there are a lot of things that I do not know and that I did not know. If you are ready to talk to me, I would love to hear about your experience.

Not everyone will respond to the invitation the same way.

“Don’t be overly sensitive to what you might get in terms of anger, fear, sadness or hopelessness,” Bolden advised.

But many blacks feel like they are finally heard and are ready to share. People like McClendon, an IT specialist for an executive management firm and a member of the Unity dialogue group.

“Previously, I didn’t feel like anyone was interested in hearing,” McClendon said. “I squeezed so much and pushed down for so long.”

If someone were to ask Bolden, who works as the vice president of real estate for a smoothie franchise, his lived experience, he could share what it was like growing up in a small, largely white town of western New York, attending a predominantly white college and navigating a career in white-dominated industries.

“I have to make sure the Whites are comfortable with me so that I don’t miss an opportunity to advance,” Bolden explained.

“I was walking in Burbank and a woman starts clutching her purse when she sees me,” he recalls. “It’s like ‘Ma’am, I’ll be the first to help you if someone catches your purse.’

“These things wear you out. White people, try to put yourself in my shoes and imagine what it does, day after day, day after day. Black people do not imagine these things.

For whites, feelings of guilt and shame can bubble up with heightened racial awareness, but Bolden advises “let it go”.

“It’s not going to help any of us,” Bolden said.

Beyond asking questions about their personal experiences, white people are advised to be cautious when seeking guidance on their own journey to racial awareness and action.

“Be very careful not to place the onus on them to educate you,” Craig-Purcell said of the role of the black community. “It’s our job to do as white people.”

Blatant racism is easier to recognize and call for what it is.

But that’s not all whites are called to understand and face.

“When people say they experience racism, believe them. It’s something that (white) people tend to rationalize, maybe as a misunderstanding or miscommunication, ”said Harris, who is black. “But it’s the subtle but cohesive below the surface and off-putting comments that pile up over and over again.”

The concept of systemic racism can also be difficult to grasp, but it is essential to understanding racism in this country.

Bolden and others recommend exploring the topic further through books, articles, podcasts, and movies – from scholars to memoir to pop culture. There are several lists of anti-racist resources organized online to explore. Some of the most recommended books on racism are currently appearing The New York Times Best Sellers List for non-fiction.

Often times, that means not shying away from difficult conversations with family or friends.

David Campt, a North Carolina-based anti-racist facilitator, who is black, developed “The White Ally Toolkit” focusing on building conversational skills among whites. The Toolkit, along with other racial literacy educators and experts such as Ibram X. Kendi, have helped inform Craig-Purcell’s own White Allies curriculum, which she launched a few years ago. years.

Campt teaches white allies to use their own lived experiences to persuade other whites that unconscious bias and systemic racism are a reality.

“You can dismiss a person’s ideas, but it’s hard to dismiss their experiences,” Campt said in an interview during his visit to San Diego last year.

He also suggests framing the conversation away from trigger words like “hate” and “racist” and instead focusing on unconscious bias.

“Move the conversation from ‘I hate these people’ to ‘maybe I don’t treat them the same,'” he said.

Bolden, who participated in the White Allied Dialogues, found that the phrase “white privilege” can be triggering for some white people as well.

“White privilege doesn’t mean white people haven’t had it hard. That means the color of their skin didn’t make it harder, ”he said.

Anti-racism advocates say they have been encouraged by the large number of whites who have participated in the Black Lives Matters protests in recent weeks.

But protests are not for everyone, especially during the coronavirus pandemic.

There are other ways of being united.

Vote. Write to local representatives (“On a postcard, not by email,” Craig-Purcell insisted). Support black-owned businesses. Amplify the voices of people of color on social media. Start a dialogue group. Donate to anti-racist organizations or nonprofits that uplift underserved communities.

Better yet, volunteer with such a group, Bolden said.

“Get to know people of color firsthand,” he said.

Allies are also encouraged to seek lasting change in their own spheres of influence, whether at home or at work.

“Understand how systemic racism plays out in your professions,” Harris suggested. This includes studying established research on the limited access of people of color to housing, loans, health care, employment, education, criminal justice interventions and other institutions. social.

“Ask your employer to provide a space for these conversations to happen,” Harris recommended. “These are concrete things that can really make a difference.

As whites establish their identity as an ally, Harris said there may be a tendency to focus on work that shifts away from putting the voices, needs and experiences of people of color first.

“Your job is to be a voice and someone who uses white privilege in a way that breaks down barriers,” he said. “Being an ally is an act of service.”

story of the black hero of the American Revolutionary War ▷ YEN.COM.GH