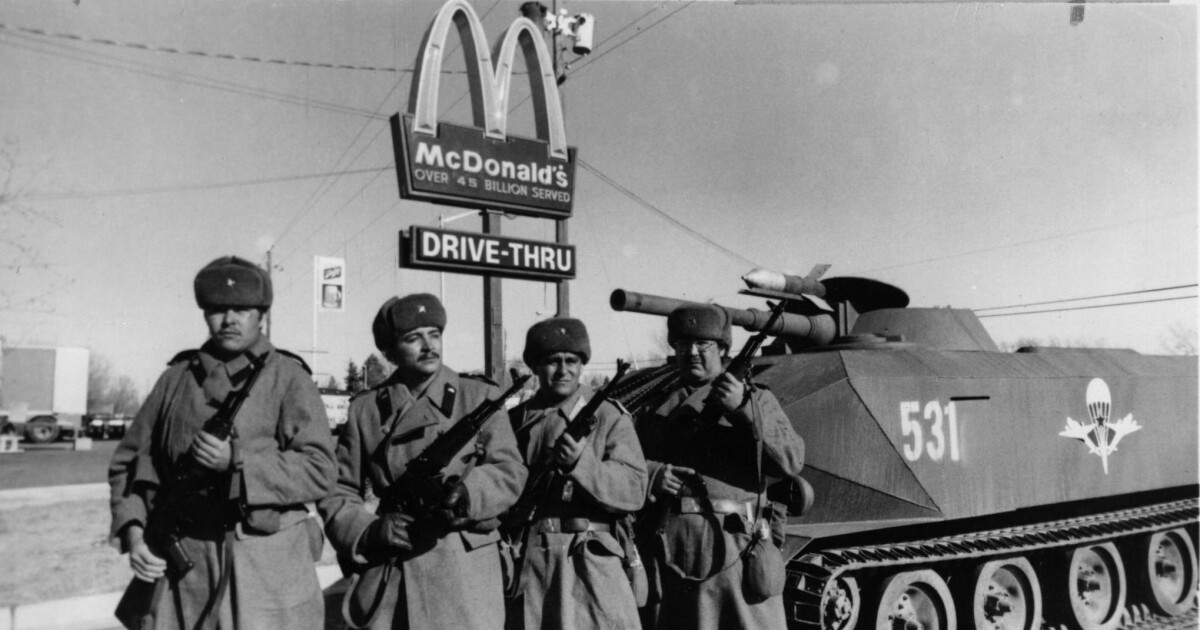 “Things have been so scary lately with Russia,” says tikTok User @MojoX with dead seriousness in a post from early March, “that I went out and got myself a Gen X bomb shelter.”

Cut to a photograph of a school desk – an image that conjures up, for generations of Americans through Gen X (including myself), memories of those wacky drills in which we prepared for the inevitable nuclear annihilation at the hands of the Soviets by stuffing ourselves under our desks.

As Russia’s invasion of Ukraine passed the month mark and reports emerged that Russian nuclear forces were placed on high alert, the culture of the end of the Cold War made a comeback. Think of it as a Cultural Cold War 2.0, with Russia as the replacement for the former Soviet Union.

References to these films also have materialized on TikTok following the invasion. “Don’t worry people. Generation X has been groomed for this since we were kids,” goes such a post in homage to “Red Dawn”, followed by the obligatory “WOLVERINES!” in all caps – a reference to the high school mascot that also serves as a battle cry for those high school guerrillas, who are fighting not only the Soviets but also their fired up Nicaraguan allies. (“Red Dawn” is peak Absurd of the Reagan era.)

The references to the 1983 made-for-TV movie “The Day After Tomorrow”, in which Jason Robards played a kind doctor in Lawrence, Kansas, struggling with the devastation caused by a Soviet nuclear attack. The film, when it first aired on ABC, was a cultural event – ​​attracting an incredibly massive audience of 100 million (at a time when the US population was around 236 million) and terrorizing a generation of viewers with its scenes. of abject devastation. When I was in middle school, we took an entire period off social studies to seriously discuss it.

In the days following the invasion of Ukraine, TikTok user @Vampslayin posted a vintage report on the film’s social impact: “Who remembers watching this as a kid?”

“Yes,” replies @chefmichelleagnew. “It was and still is scary.”

“I was going to show a video,” says @diva_dee25 of the film in a post about the film, “but then I realized, when I rewatched the videos, it sort of retraumatized me because I felt like I was back the day I watched this movie for the first time.”

I was indeed rendered insomniac by “The Day After”. As NPR’s Neda Ulaby, who grew up in Lawrence and was there for filming, noted in a report marking the film’s 20th anniversary, “The Day After” landed amid intense Cold War bellicosity and anti-Soviet paranoia. The year he left, President Ronald Reagan marked the Soviet Union a “wrong andempire”, and the Soviets shot down a Korean commercial airliner that had accidentally veered into their airspace.

On the radio, songs like “99 Luftballoons”, by German synth-pop band Nena, imagined a devastating war triggered by the innocent release of a few helium balloons into the air. The song appears as the soundtrack of another gag on TikTok which shows an image of a school desk emblazoned with the phrase, “I bought a Gen-X bomb shelter today.”

In retrospect, “The Day After” is hokey. The film hits its audience with an hour of heartfelt storytelling before it gets to the main event. When nuclear weapons finally arrive, the devastating effects of the bombs on people are rendered by showing the outlines of their skeletons, as if they were cartoons.

If you want to experience the terror of the end of the Cold War, I recommend “Son”, a British film about nuclear annihilation that aired on the BBC in 1984. Combining elements of mockumentaries and feature films, the film traces the lives (and grim deaths) of several people inhabiting the English city of Sheffield over the course of the days , months and years following a nuclear attack. Strikingly filmed – sometimes juxtaposing stills with the clinical delivery of unseen newscasters – it evokes elements of French director Chris Marker’s stylish and devastating “La Jetée”.

As with other late Cold War cultures, “Threads” also surfaced on TikTok.

These cultural artifacts, along with the Ukrainian war itself, are now water for the meme mill, often presented online through the lens of Gen X, the generation born between 1965 and 1980. A video posted on TikTok by @Kristanistan attributes the disparities in leadership styles between Russian President Vladimir Putin and Ukrainian President Volodymyr Zelensky to generational differences.

Cut to footage of Zelensky (b. 1978) in his olive suit, urging Ukrainian citizens to take up arms against an invasion. “So you’ve got this badass Gen Xer,” the narrator continues, “who’s sick of this boomer s—.”

“Perhaps this is a plea,” the video concludes, “for the old leadership to pass the reins to the new.”

Many social media posts portray Gen X as somehow uniquely suited to the time of Cold War 2.0. Now uncomfortably middle-aged (I’m 50), we’ve lived through the bomb drills, watched anxiety-provoking movies, and events like the “Miracle on Ice” take up space in our brains. (It would be the time, in 1980, when the American hockey team unexpectedly beat the Soviets 4-3 at the Winter Olympics in Lake Placid, NY)

What sets us apart from American baby boomers (born between 1946 and 1964), who also lived through the Cold War, is that, as a generation, we were too young to have a political stake in it. (I was 18 when the Berlin Wall came down.) Instead, in the United States at least, much of our memory is of watching it helplessly from the sidelines while hoping that a delirious hawk having access to the button would not be our death. all.

“That’s why Gen X is taking this head on,” read the caption of a post from TikTok user @shelc21 as she listens to Alphaville’s “Forever Young” – another popular German synth-pop track about the anxieties of living in a nuclear world. Sample lyrics: “Hoping for the best, but expecting the worst / Are you gonna drop the bomb or not?”

It was a song I slow danced to in college.

In a recent TikTok video, a millennial panics over the invasion: “I’m so sick of experiencing major historical events!” he fumes. Meanwhile, in a reaction post, a Gen Xer that goes by the handle @thatcrazyaunt looks at him, puzzled, as she grabs a glass of orange juice. A caption materializes below her: “Don’t have a cowherd. It is the behavior that triggers these historical events.

In a tweet posted at the end of February (which has since circulated on TikTok), comedian Jay Black offered the following advice to millennials and zoomers facing their “first episode of World War III panic.” As he writes, “Find yourself a Gen X friend to go with you.”

The idea that Generation X, my relentlessly scrutinized lazy generation, would come into its own in the midst of Cold War 2.0 is morbid and fun. So is the idea that a bunch of oldies who watched “The Day After” on TV are somehow ready to meet the moment – psychologically or otherwise. (The birth of Generation X, after all, largely coincides with the conversion of the military to an all-volunteer force in the United States. in 1973so I can’t say how well most of my generation would fare in a real war.)

Generational divisions are always easy at best. (Syrian dictator Bashar Assad, after all, who was born in 1965, is technically a Gen Xer.) But collectively, the flurry of social media posts marks a moment in history and culture that revolves around itself in an obscurity familiar with bloody proxy wars and overwhelming uncertainty. And as we know from last time, hiding under our desks – well, that won’t save us from anything.