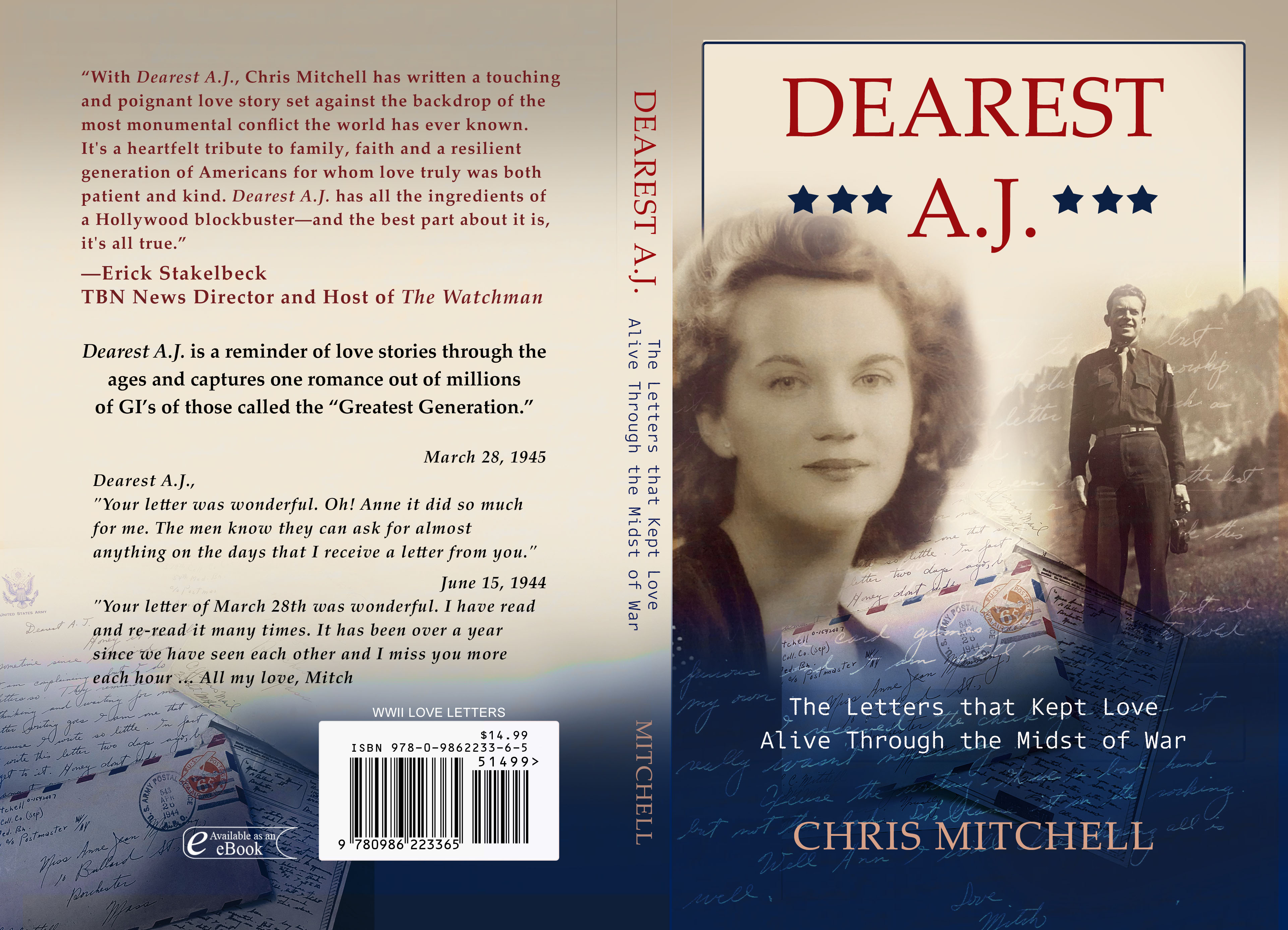 It has been said that “writing letters is an art. But it’s more than that. Letter writing is heart.”

This was certainly the case with “Mitch” and Anne Jeanne “AJ” Mitchell. They fell in love before World War II and when Mitch was swept away by the winds of war, it was their letters that kept their love alive. Millions of GIs like Mitch took pen to paper and gave their hearts to their wives and lovers during those tumultuous years. Mitch served in North Africa, Sicily and Italy and spent the better part of three years away from her AJ as she fought the battle for separation on the home front. He served as a lieutenant in the 54and Medical Battalion, set up field hospitals and directed ambulances to and from the front lines. For his service, he won the Bronze Star.

During his service, Mitch wrote over seventy letters and cards from 1943 to 1946. These were the heart strings that kept Mitch and AJ’s love alive. When he returned after the war, they married, started a family and remained together for 53 years until 1999. “AJ” lived three more years and slipped into eternity in 2002. When their children – Kevin, Brian, Jeanne and Chris – took care of his belongings, they found the letters that Mitch had written. The words they read echoed the whispers of love from a bygone era. Letters and handwritten notes, hidden in the closet, stuffed in a shoebox and locked in his heart. They had the aroma of romance, the sounds of war and the pain of separation. Who knew she kept these treasures of her heart after all these years? Of all the earthly possessions left by this wife, this mother and this grandmother, the most precious were these letters.

Chris Mitchell, the Middle East bureau chief for CBN News has told the story of Mitch and AJ – his father and mother – in a new book titled Dearest AJ: The letters that kept love alive in the midst of war. It is a chronicle of their love story and Mitch’s wartime experiences that he began to tell in his first letter of May 8.and1943:

Dear Anne, Arrived safe and sound somewhere in North Africa. When this the messed up world sets in I could tell you in the most complete detail of the episodes of my travels.”

It is also a testimony of how God answered their prayers like this from his July 26, 1944 letter:

Dearest AJ “… It looks like this – the war will soon be over, at least the

the end is in sight. The Germans still have a lot of fighting to do they themselves know that they have lost the war. Looks like they are determined to make it a costly victory. Honey, every day that passes is a day closer to home and one day closer to you. Hope and pray that God

Dearest AJ also reveals their love like this Valentine’s Day exchange in February 1944.

Dearest AJ “I’ve been sitting by a fire for a quarter of an hour read some of your letters, which I have kept … I think about you constantly and long for the day of our reunion. Many times I thought how nice it would be to be able go to the phone and say honey, ‘how about you meet me in New York?’ Or to dance with you at the Plaza. “…The mail just arrived and I received your Valentine. Honey, I couldn’t send one, but you’re my Valentine -with all my heart.”

Of those who care. All my Love, Michael

When the war came to an end, Mitch turned to home and AJ in this March 28 letterand[1945

“Most nights when I fall asleep, I live on the times we were together – the things we did – what we said and the many things we should have said… Oh my sweet

as you miss me. All my prayers are to get home in one piece for you…”

At a time when communication is instantaneous, Dearest AJ goes back to a simpler time. A time when letters could take weeks to send and receive. A time when words marinated in the soul; when the words were chosen with care and tenderness. When the anticipation of receiving a letter made the heart grow fonder. It’s a reminder of the timeless love that transcends our social media driven world.

millions of GIs of what Tom Brokaw called the “greatest generation”. They shared a sense of kinship and did what they felt they had to do. They fought for freedom.

Mitch’s last letter in AJ’s possession came in 1946 just after they moved into their first apartment together.

I thought it would be suitable and pleasant for me to be the the sender of the first letter to you in our new home. What memories cross my mind – Places where I was, and how far away you were when writing to you and how close you are now. This being my first letter since our marriage seems very strange esp. after leaving you this morning, actually just after talking to you on the phone about a chair for our house.

I wish so much for you and me. I hope God will be good for us and protect and bless our home. I want your so much happiness.

So darling, I wish you the best in our new home.

God answered Mitch’s prayer. He was good with them. He gave Mitch and AJ four children and later seven grandchildren. They lived through the Cold War, survived the tumultuous 1960s, endured financial setbacks, physical ailments, and faced the challenges of raising four children in an ever-changing world. During 53 years of marriage, two constants have remained: their unwavering faith in God and the enduring love they shared. They haven’t been here for years. But when their children rediscovered those letters — that long, silent legacy comes to life — they testified to the love that has survived between Mitch and his “Dearest AJ.”

Dearest AJ. is available on Amazon at: https://www.amazon.com/Dearest-J-Letters-Alive-Through/dp/0986223360