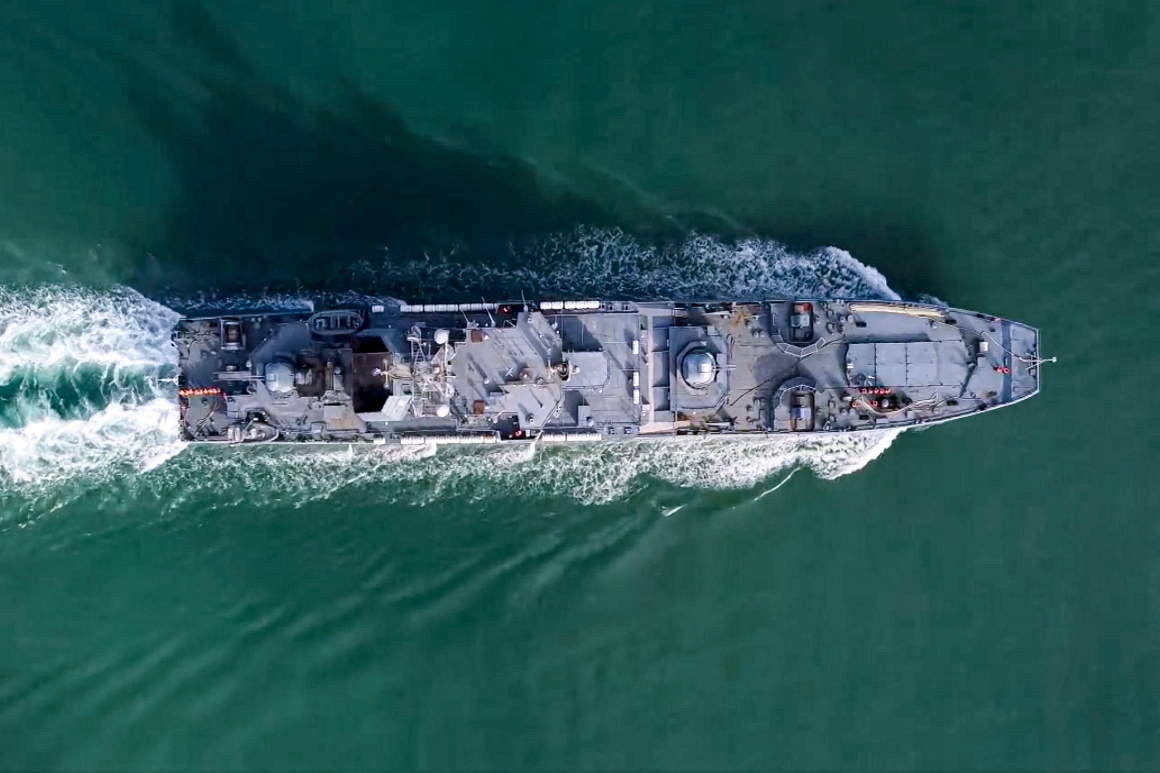 Moscow’s opening of a potential new front towards southern Ukraine emerged on Wednesday, when six amphibious ships sailed into the Black Sea as Russia declared off-limits stretches of international waters surrounding occupied Crimea and the Ukrainian city of Odessa.

The gathering of naval forces passed off quietly, while much of the world’s attention focused on the movement of Russian tanks and troops north.

Ukraine’s Foreign Ministry on Thursday protested the sea closures, calling the notice of live-fire exercises just off Ukraine’s coast “unprecedented” as they make shipping in the Black Sea and the Sea of Azov “virtually impossible”.

The notice establishing the no-go zones for commercial shipping and air traffic from February 13-19 cuts off access to Ukrainian ports on the Sea of ​​Azov and coincides with huge land exercises in Belarus that began on Thursday with tens of thousands of Russian soldiers and heavy armor.

The move in the Black Sea coincides with a larger push by the Russian Navy not seen in decades as around 140 ships take part in related exercises around the world.

On Wednesday, the six Russian amphibious ships filled with marines and their armored vehicles moved into the Black Sea, joining units recently arrived from the Caspian Sea in Crimea. The sudden gathering of naval infantry could pose a threat to the city of Odessa and raises the specter of a new front in southern Ukraine if Russian troops enter Ukraine from the east and north, where ground troops have massed in recent weeks.

Russia previously declared no-go zones in the Black Sea and left the statute in place for months, interfering with commercial shipping and the movements of other navies. “It’s clearly not in the spirit of the conventional law of the sea,” Foggo said, “and it’s being used as a form of ‘law’ against other Black Sea nations.”

NATO has been closely tracking Russian landing craft for weeks as they leave Russia’s Northern and Baltic Fleets, with British and French ships watching the flotilla as it sails along the European coast. The Moskva missile cruiser also remains in place, as do about five missile frigates, several corvettes armed with guided missiles, mine hunting ships and five diesel-powered submarines, although it is often difficult to know how many ships remain active and how many are under repair.

After meeting British Prime Minister Boris Johnson on Thursday, NATO chief Jens Stoltenberg warned: “This is a dangerous moment for European security. The number of Russian forces is increasing. The warning time of a possible attack decreases.

Following Russia’s buildup in the Black Sea, NATO allies Germany and Spain began preparations to send fighter jets to Romania and Bulgaria to help with the police mission air along the coast. “In response to Russia’s destabilizing military build-up, we have increased reconnaissance flights in the eastern part of the Alliance,” said a NATO official, who spoke on condition of anonymity to discuss the details. sensitive military deployments.

“We are ready to go,” a German military spokesman said of the deployment of three Eurofighter planes.

The Black Sea region is an area of ​​growing concern for NATO following Russia’s capture of Crimea in 2014. This invasion gave the Russian Black Sea Fleet full control of the port of Sevastopol and allowed Moscow to install the S-400 air defense. and other anti-ship missiles that can endanger much of the Black Sea and its airspace.

Romania, in particular, has sounded the alarm over Russian activities in the waterway and has spent $10 billion since 2014, buying US F-16s, artillery rockets and ship-killing missiles. advanced to protect its coastline. The country is also considering trying to join the list of nations operating the F-35 fighter jet.

Romania’s Ambassador to the United States, Andrei Muraru, told POLITICO last month that when Russia seized Crimea in 2014, “it was obvious from that moment that credible deterrence cannot be ensured only by a solid presence and major defense capabilities”.

Tensions between Russia and NATO ships in the Black Sea have increased over the past year.

In June, Russian ships fired what they said were warning shots near the British destroyer HMS Defender operating in the Black Sea, sparking international outcry over harassment from a vessel operating in international waters. That same month, the Dutch frigate HNLMS Evertsen released photos of Russian aircraft loaded with anti-ship missiles flying close to the ship.

In November, the United States moved the command ship USS Mount Whitney and the destroyer USS Porter to the Black Sea, the seventh such transit in 2021, each time attracting the attention of Russian ships and aircraft, and forcing Russian military installations in Crimea to react with instantaneous air. defense drills.

No NATO ships are currently operating in the Black Sea.

The new Russian naval deployments are remarkable for their scale. In addition to the six amphibious ships of the Arctic-based Northern Fleet and the Baltic Fleet, the Black Sea exercises include the cruiser Moskva, equipped with anti-aircraft missiles and air defense systems, as well as long-range anti-ship missiles. like other ships of the Russian Caspian Flotilla. All in all, the Black Sea deployment is the largest grouping of amphibious assets since the end of the Cold War.

Over the past week, the flagships of the Northern and Pacific Fleets, the missile cruisers Marshal Ustinov and Varyag – sister ships of the Moskva – have arrived in the Mediterranean. There they will operate near the US Navy’s Harry S. Truman Carrier Strike Group, which has been training with two other carriers, the French Charles de Gaulle and the Italian Cavour.

The Truman is accompanied by five destroyers capable of launching offensive missiles, as well as an air defense cruiser and a Norwegian navy frigate.

The French contingent brings that nation’s flagship aircraft carrier, as well as a destroyer, two frigates and a submarine.

Moscow “constitutes a significant force, most likely maintaining contact with US naval forces” in the Mediterranean, said Michael Kofman, a Russian military analyst at the Center for Naval Analysis.

In December, Secretary of Defense Lloyd Austin ordered the Truman group to stay in the Mediterranean instead of transiting to the Middle East.

Russian cruisers and their support ships will be able to use the Syrian port of Tartus for resupply, under a deal with Bashar Assad’s government that allowed Russia to expand and modernize the port. Amphibious ships drawn from the Northern and Baltic Fleets – which can launch craft to land troops and vehicles at several locations along the coast – stopped in the harbor to refuel and resupply before heading on. head towards the Black Sea.

However, Russian ships calling in the Mediterranean are unlikely to enter the Black Sea. “These ships are not destined for Ukraine,” Kofman said. “They will probably stay in the eastern Mediterranean, [forming] a sizable surface action group there” and tracking aircraft carriers and NATO ships operating in the area.