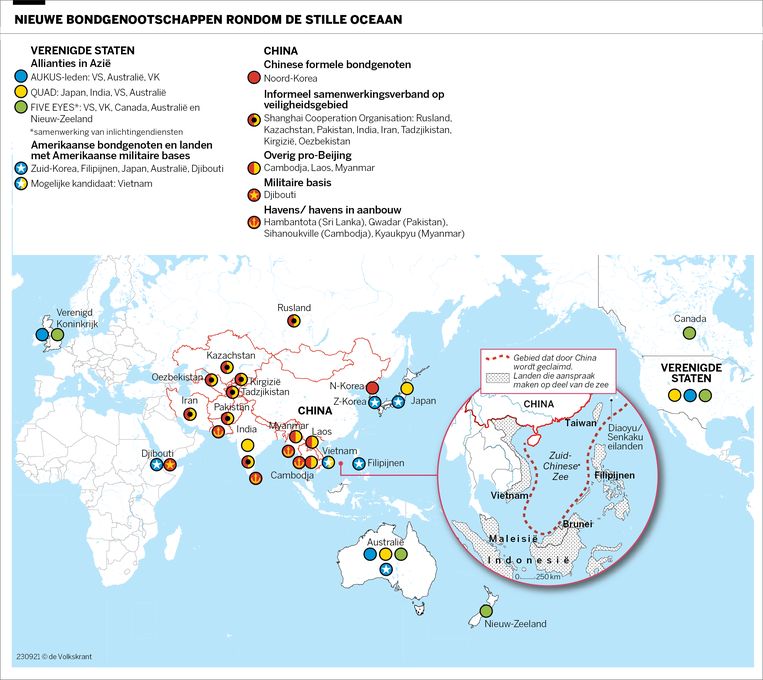 It was a German courtesy visit: docking with the frigate Bayern in the Chinese port city of Shanghai for a six-month mission. Such a pause sends a friendly signal: although Berlin, like other Western countries, is strengthening its presence in the Indo-Pacific, but not with China as the enemy in the lead.

The visit has been in the works for months, but last Friday Bayern suddenly became undesirable. According to Zhao Lijian, spokesman for the Chinese Foreign Ministry, Berlin should first create “the appropriate atmosphere”, rather than “cause incidents” in the South China Sea. Today, China is the country that claims almost all of the sea on neighboring countries, pumping rocks and coral into military installations. Germany just wanted to cross it serenely.

The fact that the new US Aukus defense pact with Australia and the UK had revealed the day before certainly played a role in the Chinese rejection. Byrne must now dock in the Australian port city of Darwin, which is also a US military base. And so Germany is sending Beijing a completely different signal.

This navigation program is an exercise of the finger on radical choices in the new cold war, where neutrality becomes more and more difficult. Those who are not with us automatically oppose it, even if the American and Chinese leaders do not say it out loud.

And while the European Union sticks to a strategy in which China is neither a friend nor an enemy, Australia has opted for American submarines, American long-range missiles and others. weapons targeting Beijing. In self-defense, and after a long hesitation: the economy is so dependent on China that Canberra is held hostage by fear of clashes with Beijing. Dismayed, US Senators in 2019 wondered how their ally could achieve it Down “We’ve lost.”

Australia once called for an independent investigation into the origin of the coronavirus and was immediately sanctioned with a Chinese trade boycott. South Korea had to endure years of Chinese anger over the installation of a US missile defense shield. This is why Malaysia is preventing him from first asking Beijing to discuss the Auku issue before Kuala Lumpur gives up its position. Indonesia, sandwiched between Australia and China, feels threatened by a possible arms race in the region.

For centuries, Asian countries have lived with China by infecting the country or remaining silent while doing their own thing. Now, with Aukus, the contours of the US-China Championship war scenario are emerging. Smaller players like Vietnam, Thailand and Singapore are silently thinking: is this club a white English speaking country, which has nothing to do with the usual caution in this region, something you can count on?

â€œBiden doesn’t work with big traditional alliances, but he tries it with small groups: loose ties with groups of like-minded people. Oko is the world’s first ‘micro-orientation’ attempt to shake up the world.

Besides Aukus, there are two other American alliances against China. Five Eyes is a western company, in which the intelligence services of Canada and New Zealand are working with the Aukus trilogy. Only Asian countries are discussed in the Quartet, where they will also sit in addition to Australia, Japan and India. Deepening military cooperation is on Friday’s agenda. It’s music to the ears of India, which harnesses American military technology.

India has become surrounded by Chinese military activity – a military base in Djibouti and economic expansion through strategically located ports in Pakistan, Sri Lanka, Myanmar and Cambodia. India witnessed this with nostalgia, until an old border dispute with China erupted last year. This deadly fight has damaged relations with Beijing so much that New Delhi is now eager to join US initiatives against the advance of China.

For China, Aukus is a nightmare, forcing Beijing to rethink a strategy that has worked for years. China has covered other countries with military and economic hegemony, or surrounded them with military and economic hegemony, but now this carefully constructed sphere is itself surrounded by a large circle of the United States and its agents. . This encourages neighboring countries who want to assert themselves more vis-Ã -vis China, but do not dare to do it alone. For example, China’s adversary Japan recently conducted its largest naval exercise since 1993 and is increasingly talking about better protection for neighboring Taiwan, which Beijing wants to bring under Chinese rule by force. if necessary.

Taiwan is the most dangerous hotspot in a region already torn by border disputes. The disagreements have been going on for decades, but Beijing has put them one by one. Maybe Aukus is making China realize that it has crossed the line.

Theresa Fallon expects Beijing to wait and see, hoping that America’s opportunity coalitions will collapse on their own. “The strategy that has always worked with China is to convince others that Beijing has no strategy, just wants to trade.”

Thus, a Chinese magician’s attack on countries at the crossroads of their choice is expected in this geopolitical rivalry. Meanwhile, Chinese President Xi Jinping will be counting his knots: who can get him to strengthen a military alliance against the United States?