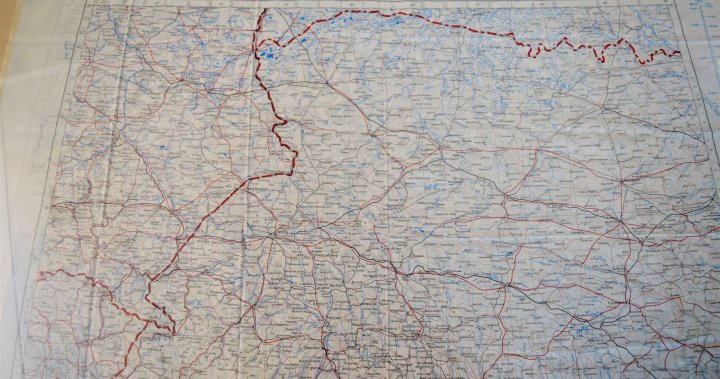 A silk map of western Ukraine carried by British pilots or other NATO pilots during the Cold War is displayed in the library of the Kelowna campus of Okanagan College.

The map, which is part of the private collection of geography professor Terence Day, depicts the western regions of Ukraine and surrounding countries. It was created so that pilots could use it in case they crash or parachute into enemy territory and need to escape or evade others.

The college said the card was intended to survive submersion in water, to be opened discreetly and to be easily concealed in clothing. At the time of its realization, Ukraine was part of the Soviet Union.

3:55
Russian-Ukrainian conflict: how each country is trying to win the information war

Russian-Ukrainian conflict: how each country is trying to win the information war

“The map is a reminder of NATO’s long-standing role in the region, which is to protect the freedom and security of NATO members, including Canada, through political and military means,” Day said.

“NATO’s fundamental military doctrine is that an attack on one NATO country is an attack on the entire NATO alliance.”

Ukraine is not a member of NATO and the map highlights the country’s precarious position in the region. Neighbors include Russia, Belarus, Poland, Slovakia, Hungary, Romania and Moldova.

2:10
Kelowna restaurant has recipe for success with perogy fundraiser

Kelowna restaurant has recipe for success with perogy fundraiser

At the time, its borders were not well defined in terms of physical geography. Historically, borders have been crossed frequently, bringing people of Russian origin to Ukraine and vice versa.

The map, along with other resources displayed in the library, provide context to some of the events unfolding during the Russian invasion of Ukraine.

The Russian Army Was So Different In WWII – Slugger O’Toole