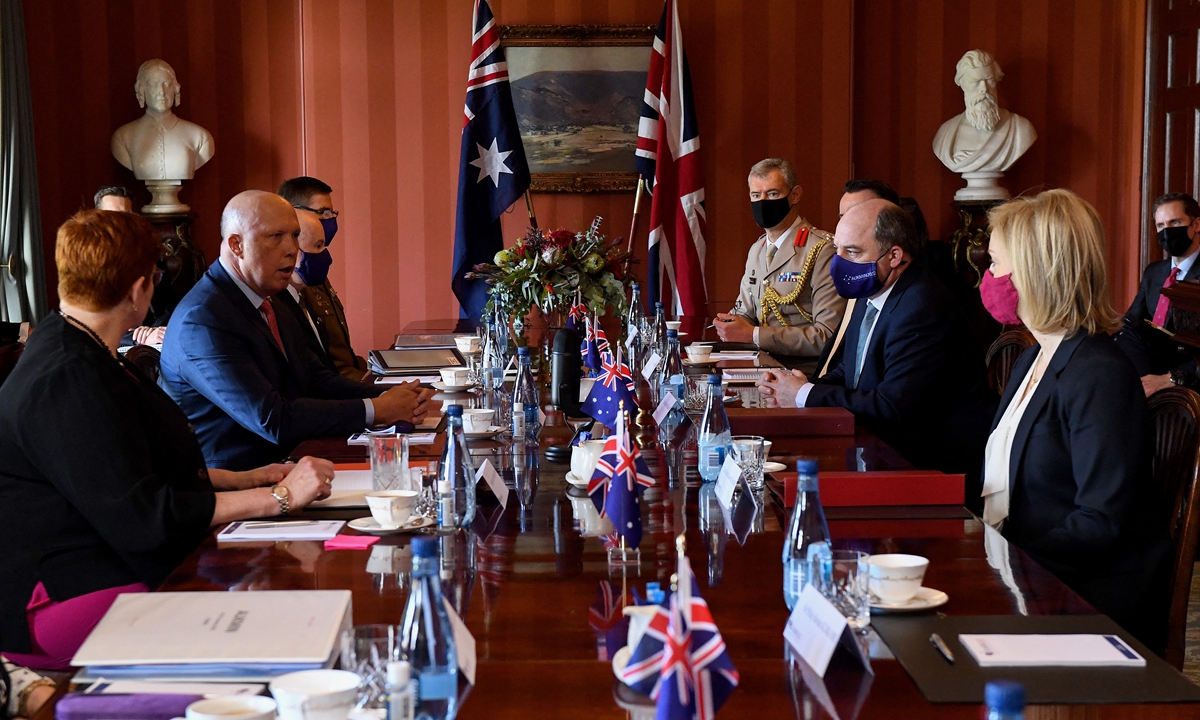 China on Sunday warned the UK not to follow the Cold War playbook because it will get it nowhere, after senior British foreign and defense officials held talks with their Australian counterparts , in an effort to advance AUKUS and summon an ideological clique to counter China and Russia.

The UK is following the US strategy of tackling China on multiple fronts and its decision not only shows the attempt by Prime Minister Boris Johnson’s administration to divert attention from domestic affairs by causing unrest abroad, but also reflects British Foreign Secretary Liz Truss’ own ambition. to use an anti-China stance to amplify his political presence as a potential candidate to replace Johnson if he resigns or is ousted, some Chinese experts have said.

“The world today is a far cry from that of 40 or 50 years ago. The Cold War is long over!” a spokesperson for the Chinese embassy in the UK said in a statement posted on its website on Sunday in response to Truss’ latest comment to the Lowy Institute of Australia on Friday. Truss is on an official visit to Australia. Truss mentioned China several times during his speech to Lowy, baselessly accusing China of exercising ‘economic coercion’ against other countries like Lithuania and working more closely with Russia, according to a transcript posted on UK government website. Truss called on the UK and Australia to work with other countries to “defend economic security and freedom”.

The accusations against China in this speech confuse right and wrong and raise questions about their true intent. They are full of misinformation about China as well as the current international situation, the Chinese Embassy spokesperson said.

The remarks replicate American rhetoric, draw lines on ideological grounds, and discredit other sovereign nations regardless of the facts. This is an attempt to justify the decision to create small circles, which has inflicted a negative impact on regional peace and stability, according to the spokesperson.

The UK is probably doing this to show their worth to the US. Additionally, Johnson is in a very precarious position as there are voices inside and outside his party calling for his resignation, so Johnson is eager to show he is making a difference in British diplomacy. , Zhou Fangyin, a professor at the Guangdong Research Institute for International Strategies, told the Global Times on Sunday.

The coordination of the United States, the United Kingdom and Australia has been strengthened through the AUKUS alliance, Zhou said. The expert pointed out that one of the main US methods is to engage its allies to form anti-China alliances through the “2+2” dialogues.

On the day Australia and the UK partnered to take AUKUS forward, US President Joe Biden held a virtual meeting with Japanese Prime Minister Fumio Kishida during which they agreed to enhance cooperation on issues economic and security issues, including the rise of China, alleged missile launches by North Korea, and Russia’s perceived objectives in Ukraine.

Cui Hongjian, director of the European studies department at the China Institute of International Studies, told the Global Times on Sunday that AUKUS had given the UK more confidence to some extent, as one of the biggest gains of the pact is that it can enter the Asia-Pacific region in the sense of the so-called tripartite security alliance, and it wants to develop its own Indo-Pacific strategy.

The UK’s Cold War playbook includes following the US to create an image of Sino-Western opposition as well as using so-called ideology and values ​​to form military alliances to confront China on the military and diplomatic fronts, Cui said.

As the Johnson administration faces pressure, Australia is also holding federal elections in 2022, so the two countries have a common need to shift conflicts outward, Cui noted. “Truss is likely to succeed Johnson if the latter resigns, and Truss’s anti-China remarks are also resonating by stoking anti-China sentiments in Australia.”

Zhou of the Guangdong Research Institute for International Strategies said that with China’s increased strength to provide security around the Indo-Pacific, AUKUS’ impact will be limited in a military sense.

For the United States, it is rather a question of using the military alliance to “decouple” economically from China, especially in high technology, and to discredit China’s image in the international community, explained the ‘expert.

World War 3: This is what would happen if a nuclear bomb fell on New York during WW3