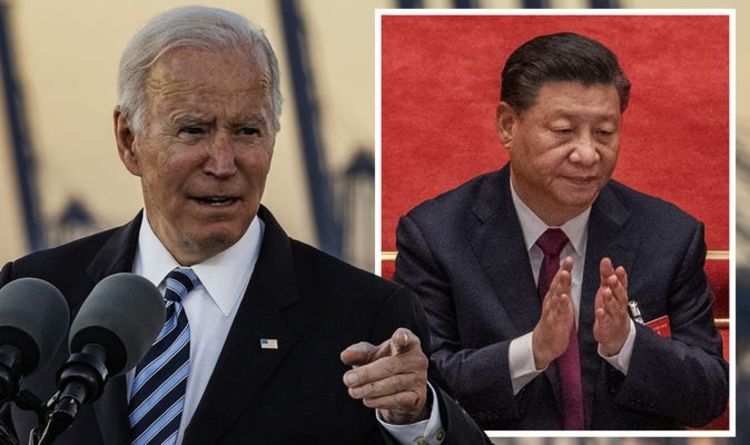 It comes after Washington and Beijing struck a surprising deal at COP26 to boost climate cooperation over the next decade. The two biggest emitters of CO2 in the world have pledged to act in a joint declaration. He said the two parties “will reiterate their firm commitment to work together” to achieve the 1.5 Â° C temperature target defined in the 2015 Paris Agreement.

The pair called for redoubled efforts to close the “significant gap” that remains to achieve this goal.

In Wednesday’s rare joint statement, action was agreed on a range of issues, including methane emissions, the transition to clean energy and decarbonization.

China’s top climate negotiator, Xie Zhenhua, told reporters that when it comes to climate change “there is more agreement between China and the United States than there is disagreement.”

US President Joe Biden and his Chinese counterpart Xi Jinping are expected to hold a virtual meeting on Monday as tensions appear to ease.

The summit presents the greatest opportunity to date to reset bilateral relations.

No major progress is expected on the burning issues, including tensions over Taiwan, Xinjiang and Hong Kong.

But the meeting is likely to produce initiatives on a range of issues, including easing visa restrictions, creating a bilateral dialogue on nuclear weapons, and a possible framework to ease trade friction to demonstrate bilateral will. to shift the relationship from confrontation to cooperation.

Following the announcement, Xi sent out a warning about the return to Cold War-era tensions in the Asia-Pacific region.

He urged global cooperation before the virtual meeting.

In a recorded video message to a CEO forum on the sidelines of the Asia-Pacific Economic Cooperation (APEC) summit, Xi said on Wednesday that attempts to draw ideological lines or form small circles for geopolitical reasons were doomed to failure.

He said: â€œThe Asia-Pacific region cannot and must not fall back into the confrontation and division of the Cold War era. “

Xi’s remarks appeared to be a reference to the United States’ efforts with regional allies and partners, including the Quad grouping with India, Japan and Australia, to mitigate what they see as the growing influence from China.

In his speech at the APEC forum, Xi also described what he believed to be the most urgent tasks for the Asia-Pacific region – to emerge from the shadows of the COVID-19 pandemic and achieve economic recovery. regular.

He added, â€œWe need to translate the consensus that vaccines are a global public good into concrete actions to ensure their fair and equitable distribution. “

Deep divisions run through the group, which includes the United States, China, Taiwan, Russia and Australia, and accounts for nearly three billion people and nearly 60% of the world’s gross domestic product (GDP).

Greenpeace welcomed the statement between China and the United States, but warned the two countries need to show greater commitment to meet climate goals.

She said: â€œUltimately, their statement falls short of the call of climate vulnerable countries demanding that nations come back to the table every year with greater ambition until the gap of 1, 5 Â° C is filled “.

EU climate policy chief Frans Timmermans said it was “really encouraging” to see China and the United States working together. “It also shows that the United States and China know that this topic transcends other issues. And it certainly helps us here at the COP to come to an agreement,” he added.

UN Secretary General Antonio Guterres said the announcement was “an important step in the right direction”.

Assault on the Soviet capital Moscow | The Second World War