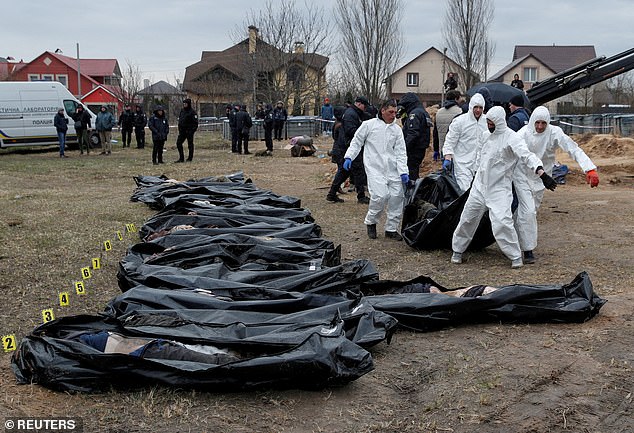 British war crimes experts are to be sent to Ukraine to help gather evidence of the ‘barbarity’ committed by Vladimir Putin’s forces, we learned today.

Foreign Minister Liz Truss announced that the team of experts, which was due to arrive in neighboring Poland in early May, would support the Ukrainian government in collecting evidence and prosecuting war crimes and would include violence experts conflict-related sexuality.

It happened as she traveled to The Hague with the president of the International Criminal Court (ICC), which has opened an investigation into alleged brutality by Putin’s forces since February.

Mass graves and the bodies of civilians mowed down in the streets have been discovered in areas like Bucha after the Russians were forced to retreat.

Ms Truss said: ‘Russia has brought barbarism to Ukraine and committed vile atrocities, including against women.’

“British expertise will help uncover the truth and hold Putin’s regime to account for its actions. Justice will be done. 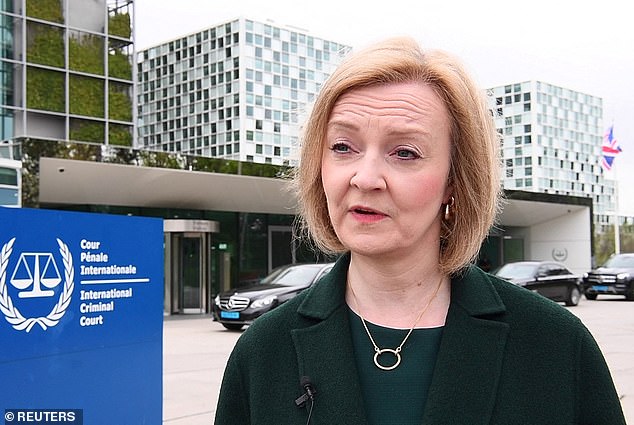 Ms Truss said: ‘British expertise will help uncover the truth and hold Putin’s regime to account for its actions.’ Justice will be done’

Allan Hogarth, Head of Policy and Government Affairs at Amnesty International UK, said: “It is welcome, and we would like to see UK expertise being an integral part of wider efforts to bring all perpetrators to justice. war crimes in Ukraine.

“The number of indiscriminate Russian missile and artillery attacks in Ukraine is increasing day by day, along with sickening reports of torture and extrajudicial executions.

“Preserving key forensic evidence during war is difficult but essential, and if the UK can contribute to wider international efforts to do so, it could prove invaluable.

“UK investigators are expected to gather material to build evidence files that can then be used by the International Criminal Court in The Hague.

“Basically, UK war crimes investigators will have to follow the evidence scrupulously – meaning that if Ukrainian forces breached international humanitarian law, that too must be fully documented.

“As we have seen with Syria and other grueling conflicts, the struggle of victims and their families for truth, justice and accountability can take years – but this is an important start.”

It comes after the death of a British military veteran in Ukraine and as the Foreign Office urgently seeks more information following reports of two British aid workers being held by Russian forces in the country .

“The Battle of Donbass remains Russia’s main strategic objective, in order to achieve its stated goal of securing control of Donetsk and Luhansk oblasts,” the department said in its latest intelligence update.

“Due to strong Ukrainian resistance, Russian territorial gains were limited and achieved at significant cost to Russian forces.”

The two British civilians detained in Ukraine were working as humanitarian aid volunteers when they were captured by the Russian army on Monday at a checkpoint south of the southeastern town of Zaporizhzhia, according to the British non-profit organization Presidium. Network.

Tributes have been paid to British military veteran Scott Sibley, who is believed to have fought in support of Ukrainian forces, after the Foreign Office confirmed that a British national died in Ukraine and another is missing without identifying the couple.

The families of both are supported, a spokesperson said, declining to give names or further details.

The fundraisers have received donations of over £10,000 for the veteran’s family, with Craig Grant writing on a Gofundme page: “To me he was a friend like no other and the bravest person I had the pleasure of knowing, he was as good as a brother to me.

Tributes were also left on the Logistics Support Squadron’s Facebook page, where a photo was posted alongside the comment: ‘This week the squadron lost a former serving soldier. A man who showed the Commando spirit until the end. TO TEAR. Scott Sibley.’

A small number of serving British servicemen are thought to have gone without leave to join the resistance against the Russian invasion, while veterans and Britons without combat experience also reportedly went to Ukraine.

There was initially confusion over the Government’s position after Ms Truss, in comments during a BBC interview on February 26, said she would ‘absolutely’ support British nationals who chose to fight for Ukraine.

However, she later backtracked on those comments, insisting that she had “expressed her support for the Ukrainian cause” in her remarks and that there are “better ways” to help defend the country.

“The Ministry of Foreign Affairs works closely with the Ukrainian authorities and effectively supports the family.

“But the government has made it clear that the travel advice is: don’t go to Ukraine.

“It was clear and it was repeated many times.”

Meanwhile, around 8,000 British Army soldiers are to take part in exercises across Eastern Europe to combat Russian aggression in one of the largest deployments since the Cold War.

Dozens of tanks will be deployed in countries from Finland to North Macedonia this summer under plans that have been upgraded since the invasion of Ukraine.

Defense Secretary Ben Wallace said the ‘show of solidarity and strength’ will see British military personnel join NATO allies and those in the Joint Expeditionary Force alliance, which includes the Finland and Sweden, for the exercises.