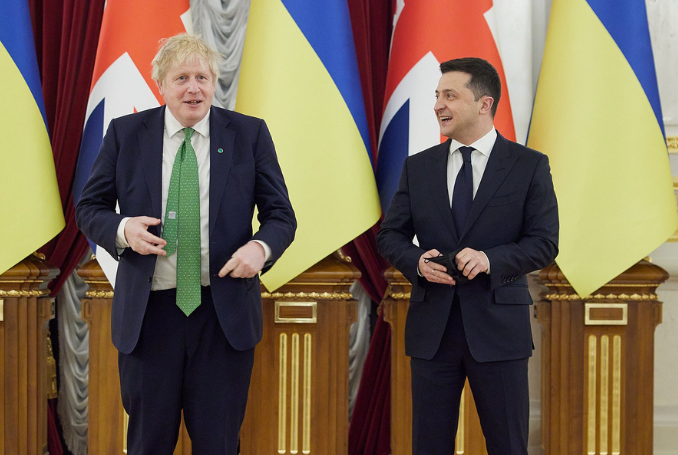 Britain’s war merchants must be ruled and held accountable

The dramatic political events of the past few days, ranging from what many experts describe as a coup d’etat in Pakistan to the intensity of armed resistance in the occupied Palestinian territories against Israeli colonization and the crimes of apartheid, are likely to dominate public discourse.

Not to be outdone amid the Russian invasion of Ukraine and the dubious stance taken by America and NATO, which many observers rightly perceive as unfair, inconsistent and hypocritical to their position on Palestine.

Since Ukraine became dominant in the world’s news networks with horrific images of death and destruction, of devastated towns and villages and the pitiful fate of young and old fleeing homes and lands to seek refuge in neighboring European countries, those who experience similar tragic events of fates but of a different color are not to blame if they remind the world of Western double standards.

The global policy “reset” undertaken by the Biden administration and followed slavishly by Europe has less to do with justice than with the greed of their respective corporate conglomerates and the military-industrial complex.

It is against this backdrop, and in particular the hype generated by British Prime Minister Boris Johnson’s boastful walk through Kyiv alongside Ukrainian President Zelensky, that Johnson’s cheerleaders in the UK are compelled to be reminded. United and across Europe His Majesty’s betrayal of Palestine.

Strutting through war-torn areas in Ukraine and pledging to continue to bolster the country’s defense with billions of pounds, technology and an unlimited supply of weapons and sophisticated military hardware, Johnson, in its belligerent rhetoric against Russia, conveniently ignores British crimes against the Palestinians.

Dr. Salman Abu Sitta, widely recognized as a leading authority on the Nakba and an acclaimed researcher known for mapping historic Palestine as well as developing a practical blueprint for implementing the right of return for refugees Palestinians, insists Britain has committed three deadly sins for which it must atone and provide a comprehensive remedy.

It will not be music to Johnson’s ears but the stain of British betrayal will remain indelible on his history.

Abu Sitta reminds us that Britain was given Mandate A for Iraq and Palestine to help the two build governmental institutions for an independent state.

Although Iraq became independent, Palestine did not. Instead, the British handed Palestine over to Eastern European Jews who were not in the country.

Britain appointed Zionist Herbert Samuel as its first high commissioner. He laid the foundations of a colonizing state on the ruins of Palestine.

Britain dismembered Palestinian society in the 1936-39 revolt. These years are marked as the Nakba inflicted by the British. Britain criminally neglected to protect the Palestinian people during the Zionist invasion and the Nakba of 1948.

The second sin that Abu Sitta insists Britain is responsible for, he describes as their shameful escape without effecting a transfer of power to Palestine.

“In the middle of the 20th century, when Britain left its dominions in Asia and Africa, including India, Cyprus, Malaysia, it officially handed over power to a local government of the people and they became independent . In Palestine, the British left hastily in disgrace, as did the recent American breakout from Afghanistan.

British officials grabbed the last plane from Lydda airport and its army departed to Egypt and through the port of Haifa.

Britain left Palestine in the hands of new armed settlers from the cold hills of Russia. History has never seen such criminal conduct.

“As a result, Palestine has become statusless, easy prey for the waiting vultures to devour.”

In his final assertion, Abu Sitta insists that given the gravity of the Nakba and Britain’s role in the dismemberment of Palestine, a Nuremberg-like tribunal or trials must be held.

“Whether a country is occupied by a foreign minority, emptied almost entirely of its people, its physical and cultural landmarks obliterated, its destruction hailed as a miraculous divine act and a victory for freedom and civilized values, in the 20th century, under the glare of the cameras and under the watchful eye of the UN and its many resolutions, all done according to a premeditated plan, meticulously executed, supported financially and politically by Britain and its allies, and still maintained today. today, is undoubtedly unique in the history of mankind.

“Yet Britain, as the primary and original culprit, has not made, or caused to be made, a full and legally rigorous international investigation into the causes and remedies of Al-Nakba, similar to the investigation Nuremberg and similar trials.”

The political and economic upheavals resulting from the war in Ukraine, which have broad global implications and which have no significant chance of ending soon, particularly given the aggressive war rhetoric and massive deployment of arms by states United and NATO allies, ironically, Britain has positioned itself as a key player in the maelstrom.

Whether one considers the soft coup in Pakistan orchestrated by outside actors or the dispossession of Palestinians from their land, Britain’s role as a colonial empire in the Indo-Pakistan subcontinent, as indeed in the Middle East, Asia and Africa, cannot be reduced to a footnote in history.

He must account for his sins as Abu Sitta insists. Unless urgently brought under control, Britain will continue to be a force of destruction and enjoy a prominent place in America’s reckless military expeditions.

– Iqbal Jassat is an executive member of the Media Review Network, based in South Africa. He contributed this article to The Palestine Chronicle. To visit: www.mediareviewnet.com