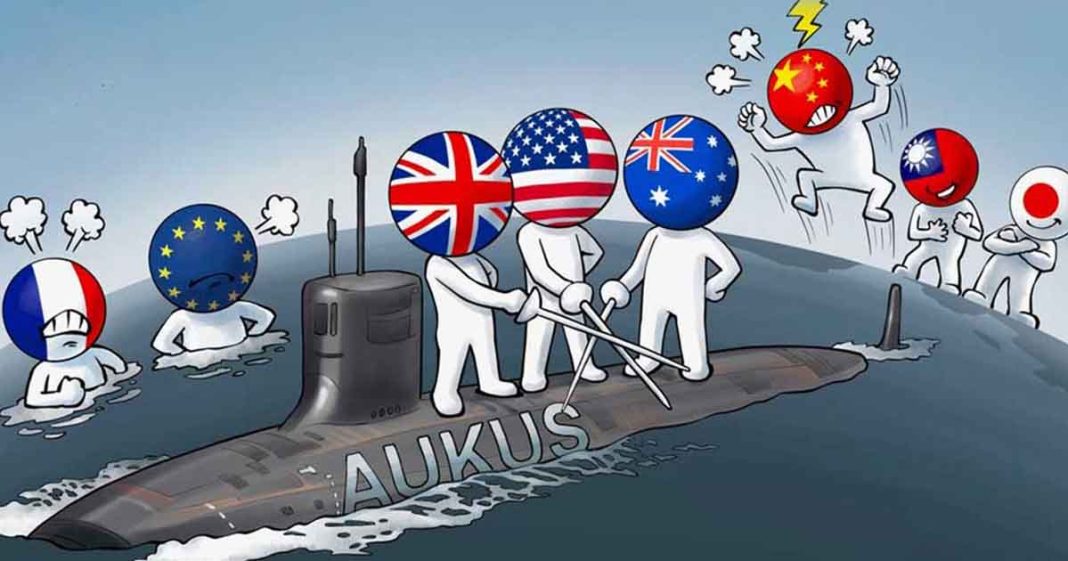 AUKUS- Are we entering a new cold war?

The most prominent constructivist, Alexander Wendt, claimed that “British 500 nuclear weapons are less threatening to the United States than North Korea’s five nuclear weapons” (1995). The affirmation confirms the power of the relationship and its jurisdiction between and among states based on norms, beliefs and culture, although they remain geographically distant. Despite the distance of 1071.7 miles between New York and England, their culture, their standards and their desire to achieve the same goal have kept them allied for years.

Through Thucydides’ trap, we can effortlessly discern that AUKUS is leading us into another Cold War. In 2016, the Trump administration played a leading role in triggering the economic Cold War, in the name of a “trade war”, between the United States and China imposing sanctions on hundreds of Chinese products. . As a result, China also imposed sanctions on US products and raw materials. Scholars opined that Democrats would end this war, but the Biden administration instigated the war with greater interest

However, the three countries entered into a remarkable trilateral security alliance, called “AUKUS”, on September 15, 2021. The initiative was supported and endorsed by the United States, United Kingdom and Australia, through of a videoconference, to enable Australia to obtain future nuclear-powered submarines. of the generation of diesel-powered submarines. This initiative also includes the alignment of greater integration of military objectives, regional policies and actions, cyber warfare and artificial intelligence capabilities.

As this initiative shows, security and military assistance from the United States and United Kingdom to Australia will ensue in the South China Sea, and the French naval group will probably miss a 90 billion contract. dollars with Australia signed in 2016. setback for French President Emmanuel Macron and his government, this initiative takes him by surprise.

Speaking of the alliance, facilitating Australia’s increased security is one side of the coin, but the other side focuses on the initiative’s core objective of confronting China in the South China Sea. , at the heart of the Indo-Pacific strategy. In this initiative. None of the three leaders, Joe Biden, Boris Johnson or Scott Morrison, has hinted at China’s concern, but it knows no bounds and AUKUS has been set up as a powerful security alliance against the push. expansionist China in the South China Sea.

Johnson called the move a “natural alliance.” He said, “We may be separated geographically,” but we are “natural allies.” Morrison, however, insisted that Australia had no hidden intention of seeking nuclear weapons. Australia will always be there to abide by the rules and regulations of the Non-Proliferation Treaty (NPT) which it ratified in 1973. Additionally, Australia joined the Comprehensive Nuclear Test Ban Treaty (CTBT) in 1998 which also insisted that Australia was avoiding pursuing nuclear weapons.

Despite this, critics say the move would indirectly boost Australia’s nuclear proliferation. The alliance creates a loophole in the NPT and perhaps eases the way for Australia to become another nuclear-weapon country. Australia is becoming the first country to use the loophole which will raise questions about the legitimacy of the NPT and other international institutions by exploiting the NPT loophole, critics say. There is no doubt that the alliance will heighten suspicions and give rise to security dilemmas among NPT members and other countries around the goal against China’s expansionist push.

Focusing on another spectrum, the UK has long worked on the concept of “Global Britain”. He aspires to engage in Indo-Pacific strategy, increase his military power and aim for global gain with the United States by enthroning the United Kingdom. The initiative would shape the shape of the neo-Cold War in the region. Despite the UK’s dependence on the US, from a military perspective, the former global hegemon is once again considering amplifying sea power. Johnson, however, felt the importance of this trio – the UK, the US and Australia – in the Indo-Pacific region, which did not let him think outside the box.

However, China is a rising power and the United States’ most even competitor. A rising power never lets a superpower stay in peace. After 2000, China’s emergence into world politics looked like a long-sleeping tiger, but by building up its military power, it becomes, over time, another lion of world politics. The United States, the most powerful lion in world politics, will never endure such an uprising of an Eastern lion, because its bravado and its hegemony are in great danger. The Chinese military uprising in the South China Sea sets another Thucydides trap in the region.

Thucydides, the author of History of the Peloponnesian War and predecessor of classical realism, asserted that “when a rising power challenges the dominance of an established power, war is inevitable between them”. For example, before World War I, Germany was Britain’s closest competitor, second in military, economic and naval power, which irritated Britain’s demons and caused it to start World War I.

Through Thucydides’ trap, we can effortlessly discern that AUKUS is leading us into another Cold War. In 2016, the Trump administration played a leading role in triggering the economic Cold War, in the name of a “trade war”, between the United States and China imposing sanctions on hundreds of Chinese products. . As a result, China also imposed sanctions on US products and raw materials. Scholars opined that Democrats would end this war, but the Biden administration instigated the war with greater interest.

However, the problem of Thucydides’ trap in the South China Sea is very apparent. China has blamed the QUAD initiative (The Quadrilateral Security Dialogue between the USA, Japan, India and Australia) since its launch. Moreover, AUKUS would undoubtedly increase anxiety and tension in China and the South China Sea, strategically and militarily. China, the lion of the East, will necessarily respond because its rule is thwarted by the lion of the West, the USA.

AUKUS, it seems, will materialize another cold war. The concepts of Eastern bloc and Western bloc will appear again around this question. In the meantime, Bangladesh must be shrewd as it maintains relations not only with the Chinese bloc but also with the American bloc, following new military and security policies. The peace of Bangladesh should not be hindered in this ordeal maintaining friendly relations with USA, China, India and all. As an NAM country, Bangladesh must maintain its basic foreign policy of “friendship to all, wickedness to none”, so it can be competent to ensure security, economic and military peace and its objectives.