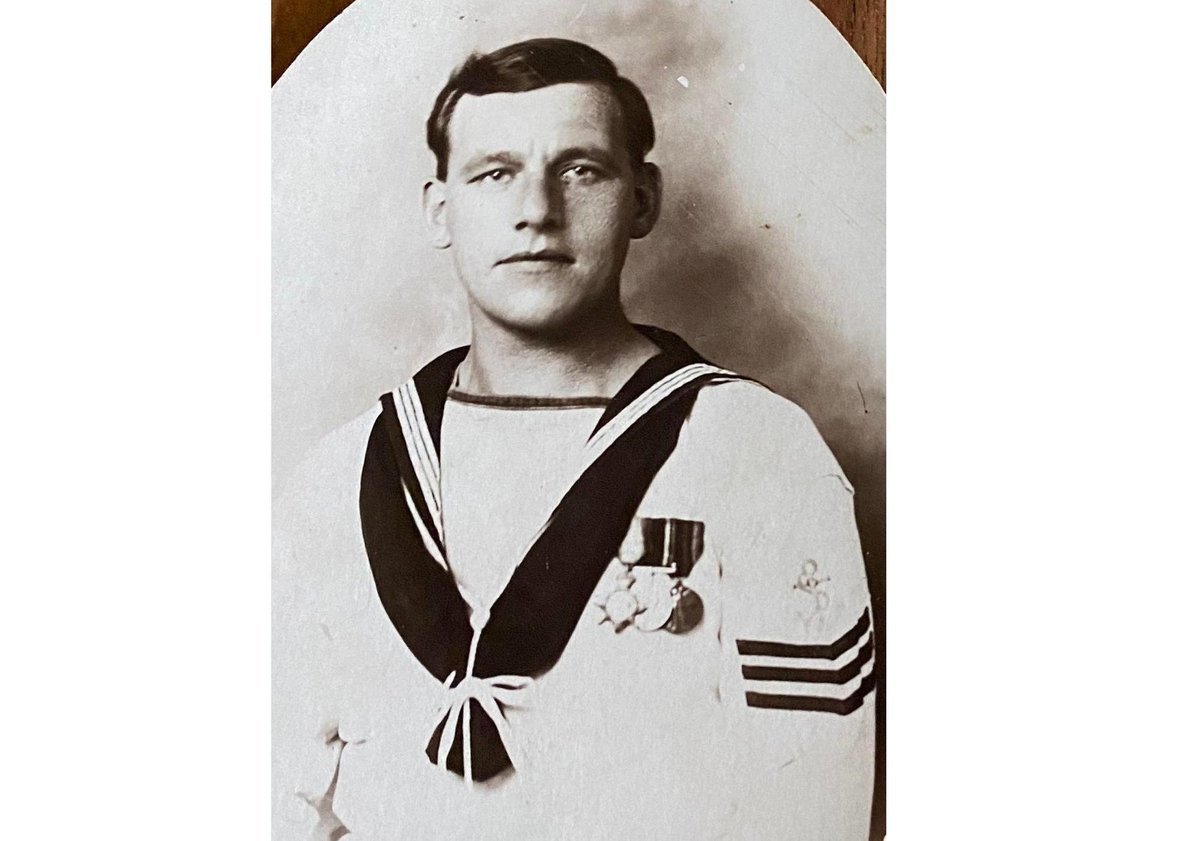 Hundreds of lives were lost on September 22, 1914, when the Royal Navy cruiser was sunk in the North Sea along with two of her sister ships.

David Edwards, born in Portsmouth and grandson of one of the survivors of the disaster, celebrates the birthday by thinking back to the incredible story of his grandfather.

Charles William Edwards was a Londoner by birth, but made Portsmouth his home.

He and his family lived in Hope Street in Landport then moved to Ernest Road in Buckland where he died in 1947.

His grandson David was born in Fareham in December 1950, then brought back by his parents to Nightingale Road in Southsea.

Queen’s funeral: Royal Navy sailors ‘brought tears to your eyes’ as they ‘ac…

This job took him all over the world, but he knew he was missing something: the sea.

Now retired, David volunteers for the RNLI and became the chairman of the Carlisle fundraising arm of the charity after moving to Cumbria.

David told The News: “Today I thought of my grandfather – Charles William Edwards.

“108 years ago today, he survived against all odds when in the early hours of the morning he found himself in the freezing waters of the North Sea.

David’s grandmother, Beatrice Maud, Charles William’s wife, with the children and a small inscription at the bottom saying: “From your loving wife and boys”.

“He was a 22-year-old stoker aboard HMS Hogue, one of three Chatham Division cruisers, on patrol off the Hook of Holland.

“The cruisers were spotted by the German submarine U9 and torpedoed one by one.

“They sank in just under two hours. The Hogue fell minutes after being hit.

“I never met Charles William because he died three years before I was born.

“The story of his survival was passed down to me by my father when I was a child.

“I paid some attention at the time, but it wasn’t until recently, when reading the collected and published accounts of survivors in the book Live Bait Squadron and after visiting historic Chatham Dockyard that the he extent of what he had been through really hit home.

“From the various accounts we have read, it appears that there was a quick decision made that only male relatives were initially allowed to be taken out of the water in lifeboats. “Charles William was one of those who was unmarried at the time.

“In fact, most of the men aboard the cruisers were either young cadets or reservists.

“The men were stripped to the waist and had to try to hold on to any wreckage for hours before they were rescued by the Dutch merchant ships, Flora and Titan.

“There were other civilian ships nearby, but they were not approaching for fear of entering a minefield.

“It took hours in the freezing water to pray and hope to survive while watching helplessly as some men who could no longer float were claimed by the sea.

“A total of 62 officers and 1,397 men died in this tragedy, while 60 officers and 777 men were saved. And I’m grateful that Charles William was one of those saved.

“He only joined the Royal Navy three years ago. He was born in Bermondsey and grew up in London.

‘Family tradition has left us with a story that it was the bankruptcy of the family business following the introduction of electric trams south of the river in London that broke the family and Charles William headed for Portsmouth to join.

“After his ordeal he remained in the navy and his naval record tells us that for most of his life he served in testing submarines and working with personnel trained to serve as submariners. Quite a twist of fate there – or was it a deliberate choice?

“Either way he instilled a love of the sea in my father Arthur Frank Edwards, his third son and through my father in me.

“My dad served in the navy and in WWII he was on Alexia, one of the MAC ships that was crudely and hastily made by welding a flight deck onto freighters and tankers.

“Alexia was a fleet escort carrier serving on the North Atlantic convoys between Nova Scotia and Liverpool. But this is another story.

“Charles William fell in love with Portsmouth and after marrying my grandmother Beatrice Maud Stevenson in 1920 they lived there for the rest of their lives.”

David added: “There have been very few other stories about this tragedy.

“The only real publicity it received came on the occasion of the centenary in 2014, when the historic Chatham Dockyard held a ceremony for the families of the lost and survivors.

“What I find very moving is the fact that after surviving the sinking of HMS Hogue, Charles William was able to find the strength within himself to have this ordinary life – to get married, to have a family, still serve in the navy.

“There was no post-traumatic stress counseling the men endured, but he was brave enough to keep going.

“My dad told me a few stories from his daily life about him stopping a runaway horse in old Portsmouth when it was at full gallop. Very brave.

“And then there was an occasion when his quick thinking saved the life of a young boy when he was in trouble in the sea off Southsea.”